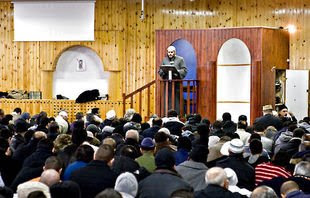 But when viewed at closer range,
the number of those that do are disturbingly high

According to the Danish online news organization 180Grader, the overwhelming majority of Turkish Muslims living in Denmark do not agree with their religious leaders engaging in political discourse inside the mosque. The report states that while half of the Pakistanis living in Denmark have no problem with the mixing of religion and politics, “only 17 percent of immigrants from Turkey and 30 percent of their descendants do.”

The Tundra Tabloids has found out that there are 31 800 Turkish immigrants currently live in Denmark, and if 17% of these Turks agree with political Islam, it translates into over 5000 people having no problem with sharia and politics in the mosque. Now couple that with 30% of Turkish immigrant decedents as well as half of the 10 000 Pakistanis living there, that’s a lot of people living in conflict with the host society’s understanding of how Denmark works.

So the Tundra Tabloids is nowhere near the point of breaking out the champagne bottle and popping the cork, at least not any time soon. KGS

Half of the Pakistani immigrants and descendants welcomes an Imam preaching politics, while only 17 percent of Turkish immigrants, feels the same way. Danish Muslims are far from a single block when it comes to the question of how much influence, priests and religious leaders must have the policy, writes Kristeligt Dagblad.

This is shown in a survey carried out by Peter Gundelach who is professor of sociology at the University of Copenhagen. Only 17 percent of immigrants from Turkey and 30 percent of their descendants are in favor of clerics and religious leaders influencing policy. “

We are inclined to say that these are Muslims, that is immigrants. But the sort of generalization does not make sense,” says Peter Gundelach to Kristeligt Dagblad.”