Skip to content
Home
/
2009
/
June
/
5
/
AIPAC
/
Obama Reneges on Speech to AIPAC in Cairo Address…….
Facebook
Twitter
Google+
LinkedIn
Pinterest
The ONE giveth on June 4th
and the ONE taketh away on June 4th 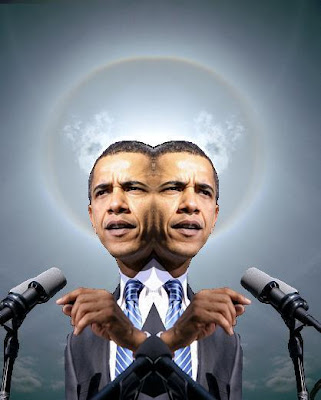 Obama: Given my Messiah like status,
did you think I’d act any differently?

Thanks to TINSC for sending the speech Obama gave at the annual conference for the Jewish lobby group, AIPAC, on June 4th, 2008, during his campaign for the White House. Indeed, there was something to be learned from it, as well as from the one he delivered to the Muslim world in Cairo on June 4th, 2009, exactly one year later. What a difference a year makes.
Obama said last year while addressing AIPAC:

“And then there are those who would lay all the problems of the Middle East at the doorstep of Israel and its supporters as if the Israeli-Palestinian conflict is the root of all trouble in the region.”

But in speaking to a packed hall in Cairo, Obama carefully placed the mentioning of the Israeli-Palestinian conflict before the portion dealing with Iran and nuclear weapons. This was not done by accident, Obama is sending a crystal clear message that he intends to place all of his energies in forcing a solution onto Israel (come on, you know that’s what is going to happen) before he focuses the US’s full attention on Iran and its nuclear weapons quest.

Obama: The second major source of tension that we need to discuss is the situation between Israelis, Palestinians and the Arab world.

The third source of tension is our shared interest in the rights and responsibilities of nations on nuclear weapons.

Obama, like many other politicians is caught stating something that he more than likely, never truly believed in himself, but for political expediency, he lied for what he thought was for the greater good. If not for the stakes being so high, such a fib would not be considered such a serious breach of faith. But the future of Israel is indeed at stake, and had many known of his true intentions on the June 4th of last year, perhaps he might have not been able to deliver his other speech exactly a year later. KGS

UPDATE: Commenter Gudrun reminds the TT that B.Hussein reneged on his call for an undivided Jerusalem the very next day after the speech he gave at AIPAC. Thanks Gudrun, for the reminder!