Barack Hussein Obama:
I am the one to heal those rifts

Even the King of Saud is a believer 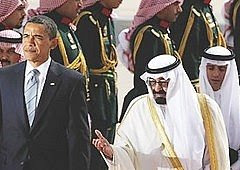 I send to Egypt the ‘Rift Healer’

And the world stares in a fixed gaze towards Cairo, as Obama is set to deliver his long awaited message of healing and vision for the Middle East. I’m sure that the Muslim Brotherhood is very much appreciative of having been invited to sit in the audience to hear B.Hussein’s most important speech to date, in person.

Such a nod to the MB by Obama cannot be overlooked, seeing that the Muslim Brotherhood is an “international Islamic organization dedicated to the imposition of Sharia, by violent or peaceful means, throughout the world.” I assume that the Muslim Brotherhood is now being wooed by the Obama administration into becoming just a non-violent version of its Islamic fundamentalist self. Ok, now we can all relax. KGS

Obama in Egypt seeking to heal rift with Islam

CAIRO — U.S. President Barack Obama arrived in Egypt on Thursday to make a momentous multimedia address to the world’s 1.5 billion Muslims, seeking to heal a wide breach between America and Islam.

Obama landed in Cairo after a visit to Saudi Arabia, where he held talks on Middle East peacemaking, Iran and energy issues with King Abdullah.

Police have clamped tight security on the Egyptian capital and the road from the airport likely to be taken by Obama’s motorcade was swamped with plain clothes and uniformed security officers.

Obama, also due to hold his first talks with Egyptian President Hosni Mubarak and to tour the pyramids of Giza, is seeking to start a complete overhaul of the relationship between the United States and Islamic faithful.

“There has been a breach, an undeniable breach between America and the Islamic world,” David Axelrod, Obama’s top political adviser said in Saudi Arabia.

“But the president is a strong believer, in open, honest dialogue.”