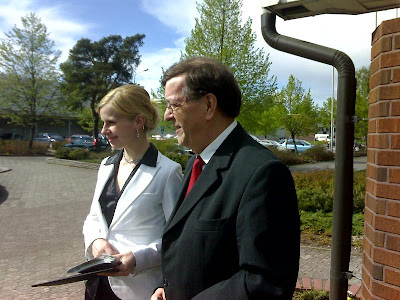 Riikka Manner & Finnish Minister of Commerce Paavo VäyrynenIt’s a rare day when you can get a couple of politicians to speak straight, going on the record as being against the Lisbon treaty/EU constitution. As a matter of fact, Väyrynen was very emphatic about the gross lack of accountability within the EU, and when he mentioned that he was one of few MP’s in the Finnish parliament to vote against the ratification of the EU treaty, the hall erupted in solid applause for his efforts.It’s interesting to see just how far society has slipped for the MEP hopeful thinking it necessary to state, that, it isn’t populism to say that you’re seeking election in order to drive solely Finnish interests in the European parliament. I mean, in a saner world, it would be self evident that no one else will look out after your own interests other than yourself, and those you place into office to act on your behalf. She said as much, but for her to repeat the obvious shows how just much the “open borders crowd” of Leftists have influenced public opinion.On the way out of the Äänekoski town hall, as both politicians were ready to get into the waiting car that was to take them to their next stop in Saarijärvi, I mentioned to Manner in English, (just so that she would remember the incident) that demanding full transparency and democracy within the EU are the main issues of the day, Finnish self interests, no matter how important, come after the importance of democracy for our governing institutions. If you want to protect your own self interests, you have to have a dependable and trustworthy governing institution available in order to pursue them. Riikka Manner agreed, so that’s at least one feather in her cap. KGS