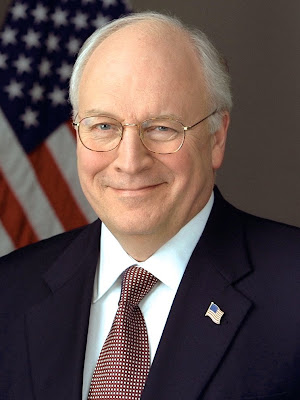 Dick Cheney: “But I’ll freely admit that watching a coordinated, devastating attack on our country from an underground bunker at the White House can affect how you view your responsibilities.”
Now that the Obambi administration has taken to trying to rewrite the historical record on the last eight years of the Bush administration, -which includes the introduction of interrogation methods by the CIA used at the US base in Guantanamo Bay Cuba- former US Vice President Dick Cheney comes out swinging with a speech dedicated to correcting the current administrations coloring of the events after 9/11.
The Bush administration of course made judgements in error during its time in office, but never let it be said that it either committed or condoned the methods of torture, nor that it did not act in the best interests of the people it was sworn to uphold and protect. KGS
H/T Atlas shrugs

There in the bunker came the reports and images that so many Americans remember from that day – word of the crash in Pennsylvania, the final phone calls from hijacked planes, the final horror for those who jumped to their death to escape burning alive. In the years since, I’ve heard occasional speculation that I’m a different man after 9/11. I wouldn’t say that. But I’ll freely admit that watching a coordinated, devastating attack on our country from an underground bunker at the White House can affect how you view your responsibilities.

To make certain our nation country never again faced such a day of horror, we developed a comprehensive strategy, beginning with far greater homeland security to make the United States a harder target. But since wars cannot be won on the defensive, we moved decisively against the terrorists in their hideouts and sanctuaries, and committed to using every asset to take down their networks. We decided, as well, to confront the regimes that sponsored terrorists, and to go after those who provide sanctuary, funding, and weapons to enemies of the United States. We turned special attention to regimes that had the capacity to build weapons of mass destruction, and might transfer such weapons to terrorists.

We did all of these things, and with bipartisan support put all these policies in place. It has resulted in serious blows against enemy operations … the take-down of the A.Q. Khan network … and the dismantling of Libya’s nuclear program. It’s required the commitment of many thousands of troops in two theaters of war, with high points and some low points in both Iraq and Afghanistan – and at every turn, the people of our military carried the heaviest burden. Well over seven years into the effort, one thing we know is that the enemy has spent most of this time on the defensive – and every attempt to strike inside the United States has failed.

So we’re left to draw one of two conclusions – and here is the great dividing line in our current debate over national security. You can look at the facts and conclude that the comprehensive strategy has worked, and therefore needs to be continued as vigilantly as ever. Or you can look at the same set of facts and conclude that 9/11 was a one-off event – coordinated, devastating, but also unique and not sufficient to justify a sustained wartime effort. Whichever conclusion you arrive at, it will shape your entire view of the last seven years, and of the policies necessary to protect America for years to come.

The key to any strategy is accurate intelligence, and skilled professionals to get that information in time to use it. In seeking to guard this nation against the threat of catastrophic violence, our Administration gave intelligence officers the tools and lawful authority they needed to gain vital information. We didn’t invent that authority. It is drawn from Article Two of the Constitution. And it was given specificity by the Congress after 9/11, in a Joint Resolution authorizing “all necessary and appropriate force” to protect the American people.

Our government prevented attacks and saved lives through the Terrorist Surveillance Program, which let us intercept calls and track contacts between al-Qaeda operatives and persons inside the United States. The program was top secret, and for good reason, until the editors of the New York Times got it and put it on the front page. After 9/11, the Times had spent months publishing the pictures and the stories of everyone killed by al-Qaeda on 9/11. Now here was that same newspaper publishing secrets in a way that could only help al-Qaeda. It impressed the Pulitzer committee, but it damn sure didn’t serve the interests of our country, or the safety of our people.

In the years after 9/11, our government also understood that the safety of the country required collecting information known only to the worst of the terrorists. And in a few cases, that information could be gained only through tough interrogations.

In top secret meetings about enhanced interrogations, I made my own beliefs clear. I was and remain a strong proponent of our enhanced interrogation program. The interrogations were used on hardened terrorists after other efforts failed. They were legal, essential, justified, successful, and the right thing to do. The intelligence officers who questioned the terrorists can be proud of their work and proud of the results, because they prevented the violent death of thousands, if not hundreds of thousands, of innocent people.