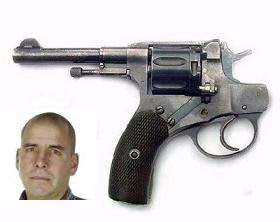 Keskisuomalainen editorial chief, Tapani Luotola
When it comes to Israel, our reporting and editorials are indistinguishable

A typical column by the Central Finland newspaper’s former foreign news editor, Tapani Luotola, who snuggles up to the idea that Obama is taking the right course of action concerning Iran and Israel, by ending it’s special relationship with the Jewish state. Apparently for Luotola, appeasing a genocidal dictator while sticking a shiv into the back of ally is the most logical way to conduct foreign policy.Tapani Luotola: “Obaman believes that the Israeli-Palestinian peace should be achieved before focusing on the Iranian problem. Obama endorsed the U.S. position on the Palestinian issue as a two-state model and gave the Palestinian state as the only way to permanent peace in the region. Netanyahu has not expressed his support for the project nor talked about an independent Palestinian state. […]Now Obama has decided to move closer to Iran, he is withdrawing American troops from Iraq and has suggested that the relationship with Israel is changing. Not so fast. The Tundra Tabloids believes that in spite of the deep concern it has towards Obama’s backward view of the ME, and the forcing of a settlement, one must not close a blind eye to everything the man is saying. As Barry Rubin correctly pointed out:

“First, Obama went to great lengths to stress his belief in the special relationship between the two countries, knowing his fealty to it has been (understandably and rightfully) challenged. He consciously escalated it by calling it an “extraordinary relationship” adding “historical ties, emotional ties,” “only true democracy of the Middle East,” “a source of admiration and inspiration for the American people.” He then went on to say Israel’s security “is paramount” in his policy.No signal to Arab regimes or Iran here of eroding support. This is the part they will look at and he knew it. This is not mere boiler plate. By setting the bar so high he is saying that the relationship is central and important, one not to be lightly undermined. That doesn’t mean he won’t do anything in that direction but it is publicly limiting himself from making any fundamental shift.”READ IT ALL HERE Part 1 & Part 2

What was Luotola thinking…or was he just caught in a weak moment, being unable to contain his hopes and enthusiasm…that being, the end of the US’s special relationship with Israel? I’ll bet that that was exactly it. But the former foreign news editor continues:”The basic premise is the same as in countless other initiatives for peace: Israel must withdraw from areas seized during the 1967 war, and an end to the settlements in the occupied zones. But unlike many of their predecessors, Obamalla seems to be very hopeful about awaking confidence in the Arab countries.”

Luotola is just hearting Palestinian/Arab League talking points, not actual international law dealing with the conflict. He obviously has no clear understanding of it, or he wouldn’t be talking exclusively about Israel, that “it must do this or that“, and certainly not withdrawing from every spec of land in the West Bank. UNSC 242 places equal demands upon the Arabs as well, Luotola is either ignorant about it, or doesn’t want his Finnish readers to know.But in all honesty, the reason he mentions Israel only, is because, being a partisan journalist -who knew nothing about the difference between UNSC chapter 6 and chapter 7 resolutions until I told him myself- he is fully on the Palestinians’ side, and can’t wait for that ‘special Israel-US relationship’ to end. That’s typical of the kind of reporting we have here in Finland, from just plain biased reporting, skewed editorials and columns, to ultra biased reporting, skewed editorials and columns. It’s an excellent laboratory for those interested in research on the brainwashing of a society. KGS

And meanwhile, Iran thumps its chest at the logic of the Luotola’s and the Obama’s of the world.