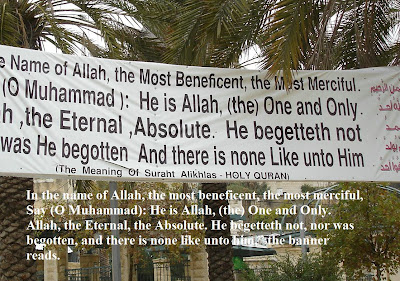 In Muslim controlled areas of the P.A.,
“in your face contempt” is a daily occurrence

Last week Thursday, J’lem Post columnist, Larry Derfner, wrote an article about Palestinian Christian-Muslim relations that to some extent, soft peddled the situation of oppression and intimidation by Muslim Palestinians towards their Christian in both areas of the disputed territories. Christians face a “systemic racism on a daily and hourly basis” at the hands of the majority, and columnists like Derfner, instead of really dealing with the issue as it really is, helps to further extend their misery by repeating blatant regurgitated Muslim talking points.

Thankfully in today’s Front Page Mag, Seth Frantzman rips the curtain away from the Derfner article, revealing what the real situation is like for Christians living in the disputed territories at the mercy and good will of their Muslim superiors. I could care less that some Christian Arabs have obtained (seemingly) seats of power and authority in the P.A. government apparatus, it’s the Muslims that pull all the levers of power, these Christians are mere window dressings as well as useful stooges. Read all what Frantzman has to say about it, as well as taking the time to read Dr.Justus Weiner’s seminal work “Human Rights of Christians in Palestinian Society” KGS

As an article in today’s New York Times proves, Palestinian and other Arab Christians are a perennial political football, especially with Pope Benedict XVI’s visit to the Holy Land. Seen by some as the epitome of what happens to minorities under Islamist rule when their shops are firebombed in Hamas-ruled Gaza, they are also continually used by the Western media to show how the Israeli security fence divides those in Bethlehem from Jerusalem. Even as their community shrinks, they seem to get more and more attention. They were a centerpiece of Jimmy Carter’s Palestine: Peace not Apartheid.

It is worthwhile, therefore, to consider a little about their recent history and dispel some of the myths that have grown up about them. A recent Time Magazine article by Andrew Lee Butters notes that:

the creation of Israel has been a disaster for Christians in the Middle East. Many of the Palestinian refugees…were Christians. The flood of Palestinian refugees into Lebanon helped spark a civil war between Muslims and Christians there…the ongoing occupation of the West Bank [by Israel] is strangling the life out of those Christian communities that are left.

The truth is quite different. There were roughly 150,000 Arab Christians in British mandatory Palestine in 1947, on the eve of Israel’s 1948 War of Independence. Some 75,685 Christians fled the areas that became Israel, leaving 32,000 in Israel in 1949, mostly in Nazareth, some villages in the Galilee and in Haifa, Acre and Jaffa. Family reunification and repatriation programs brought their numbers to 39,000 by 1951. Most Christian refugees came from Jaffa, Haifa and West Jerusalem and almost all of them fled before Israel declared independence in May of 1948.

In fact, Ben-Gurion ordered the IDF give special protection to Nazareth when it was seized on July 16: “Those who penetrate into the city will fight valiantly against invaders and gangs, wherever they resist; at the same time they will meticulously and conscientiously refrain from harming, despoiling or pillaging holy places.” Christian villages in the Galilee, many of which are also shared with Druze, were given special protective treatment as well and few were harmed by Israelis or abandoned by their Christian inhabitants.

Christians actually benefited demographically from the creation of Israel, rising from 1 in 7 of the Arab population to 1 in 3 by the 1950s. Rather than forming “many” of the refugees, they formed a small minority and fared much better than their Muslim counterparts. Most were middle class, educated and spoke foreign languages. Because of this, prominent Palestinian Christians, such as the families of Edward Said and John Sanunu (Ronald Reagan’s Chief of Staff), easily assimilated in the West. Being overwhelmingly urban in 1947, 115,000 of them lived in towns and cities. This made them both vulnerable during the war and also led to their ability to flee the fighting easily.

Lebanon was certainly harmed by the influx of Palestinian refugees but its Christians were hurt primarily as a result of the 1970 Jordanian Civil War, after which Arafat’s PLO created a state within a state in Lebanon and, in alliance with other Muslim militias, destabilized the country. Far from “strangling the life” out of Christian communities in the West Bank, where there are barely 50,000 Christians, the access to Israel and its economy, education and medical facilities helps them. In contrast, the Hamas victory in Gaza after the Israeli withdrawel hasn’t made their life better. The Christians in the Palestinian territories and the ones in Israel have flourished even though demographically they have declined to 2% of the population.

The other side of the story of Palestinian Christians is that they have had a long and hallowed role in Arab nationalism. Mathilda Moghannem, a Protestant Palestinian feminist, declared in January of 1948 that “Christians will become Muslims to defeat Zionism.” George Habash, founder and leader of the communist terrorist PFLP, was a Christian as was Yasser Arafat’s wife. In the 1970s a Catholic Christian priest, Hilarion Carucci, was even convicted of running guns for the PLO.

Palestinian Christians suffer periodic bouts of intimidation and harassment. Their churches are spray-painted with graffiti and while Christian women marry Muslim men and Palestinian law ensures their children must be raised Muslim, when a Christian man is rumoured to date a Muslim woman riots have ensued. Larry Derfner recently wrote in the Jerusalem Post that they are a “minority that tends to along to get along…[and] keep their complaints to themselves” and that attacks on them may reflect “class resentment.” Such talk about minorities might remind us of how they were supposed to behave as Dhimmi under Islamism or how the Jews once lived in Europe before the Holocaust. People resented the Jews’ class as well, hardly an excuse to attack and harass them.