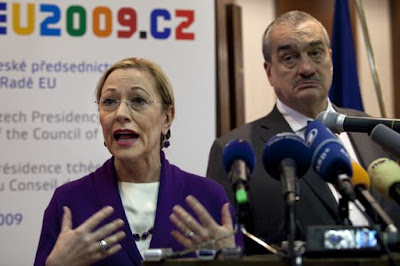 Benita Ferrero-Waldner: Trust me when I tell you
that I don’t know what in the hell I’m talking about Contrary to the nonsense being peddled by Ferrero-Waldner, Israel has been fully supportive of the two state solution, as long as there was a Palestinian government devoted to the same. The current Israeli Prime Minister, Benyamin Netanyahu has not stated anything to the contrary.What’s in question, is both the EU and US officials hinting that Israel needs to accept Hamas’ participation in a future “unity government”, and negotiate with it, in spite of their refusal to recognize Israel, reject violence and accept all pre-existing agreements.
EU officials row over upgrading Israeli ties