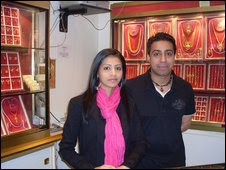 Sadiqs: Veiled customers? NOPE!They are completely right in banning the entrance of veiled people into their store, it’s something that should be banned for public use as well. It’s a security risk, something that Dr.Daniel Pipes has commented on back in 2007:

DP: Following my rule of thumb that Muslims enjoy the same rights and obligations as other citizens, but not special rights or obligations, a woman’s freedom of expression grants her the option to wear a hijab. In contrast, burqas and niqabs should be banned in all public spaces because they present a security risk. Anyone might lurk under those shrouds – female or male, Muslim or non-Muslim, decent citizen, fugitive, or criminal – with who knows what evil purposes.”

It’s exactly for those reasons that the shop owners who are Muslims themselves, have restricted the use of the full face covering from their store. It’s a great security risk in this day and age due to Islamic terrorism, and as well as being a convenient disguise in a Muslim populated area for a thief to don and then discard. KGSShop raid prompts Muslim veil ban

The owners of an Asian jewellery shop which was recently robbed have decided to turn away people wearing the traditional veil worn by Muslim women.

ATAA Jewellers in the west end of Glasgow was raided by two Asian men entirely covered apart from their eyes.

The pair wore full Muslim female dress, including the Niqab headwear, and were carrying handbags.

The two girls working at the time were left so shaken there are plans for a sign banning anything covers the face.

The store’s owners said they think it is an idea that will be taken up by other businesses.

They acknowledged that such a move may offend some people, but they said safety was their priority.

Rukhsana Sadiq was in the shop when it was robbed. She spent hours showing what she thought were the two women gold, but she never saw their faces.

“We didn’t realise how tall they were until we got attacked and the pepper sprays came out,” she said.

Rukhsana said the incident has left her terrified, and suspicious of everyone she sees.

She added: “They know us by face, but we don’t know who they are. I mean they can even walk by the shop, we don’t even know it’s them and it’s really, really frightening.

“It will just help if the community gets together and does something solid, for these women to know. It is our safety that matters as well at the end of the day.

“God forbid anything like this happening to anyone else.”[…]But Madihah Ansari, a 19-year-old student in Glasgow, said a sign banning the veil was not the solution. Madihah wears a Burkha and always has her head and body covered. Sometimes she chooses to wear a Niqab as well, meaning her face is covered. She said: “I just really don’t like that idea. It is like prejudice about one type of person.”Just because two guys did a crime and they were dressed up in that kind of outfit you can’t prejudice everyone else. “There’ll be loads of people who just want to go in and buy gold and come out. To prevent them kind of reminds me of when they had signs saying ‘no blacks’.”

NOTE: Of course there is the whining Muslim included in the story, who uses a highly laughable comparison of banning the veil with racial segregation. Such a comparison should be rejected on the spot, this is not a question of someone being banned for being born the way he or she is, but for a choice in lifestyle, and even more so, since the veil is not even required by Islamic law.H/T: GOV