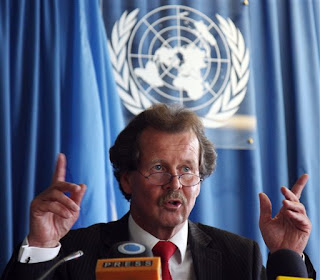 Manfred Nowak:
We don’t, but we like to pretend that we do!Nowak represents that international institution (the UN) which stood by and watched hundreds of thousands being butchered in Ruanda, without raising a single gun in defense of the helpless. It allows states that are gross violators of human rights, which includes the state sanctioning of torture (real torture), rape and murder, to head its human rights council, and yet this pickle head of a UN beaurocrat is going to lecture the US on who it should prosecute?

VIENNA (al-AP) – The U.S. is obligated by a United Nations convention to prosecute Bush administration lawyers who allegedly drafted policies that approved the use of harsh interrogation tactics against terrorism suspects, the U.N.’s top anti-torture envoy said Friday. Earlier this week, President Barack Obama left the door open to prosecuting Bush administration officials who devised the legal authority for gruesome terror-suspect interrogations. He had previously absolved CIA officers from prosecution. Manfred Nowak, who serves as a U.N. special rapporteur in Geneva, said Washington is obligated under the U.N. Convention against Torture to prosecute U.S. Justice Department officials who wrote memos that defined torture in the narrowest way in order to justify and legitimize it, and who assured CIA officials that their use of questionable tactics was legal. “That’s exactly what I call complicity or participation” to torture as defined by the convention, Nowak said at a news conference. “At that time, every reasonable person would know that waterboarding, for instance, is torture.”

Making someone “highly uncomfortable” to extract information (like waterboarding), knowing full well that their lives are not in danger, can’t be compared to brutal, sadistic torture in which the individual is never sure of, that when the excruciating pain ends, so does the living. KGSNOTE: A salient point from the Power Line Blog:Gerald Warner: “So, next time a senior al-Qaeda hood is captured, all the CIA can do is ask him nicely if he would care to reveal when a major population centre is due to be hit by a terror spectacular, or which American city is about to be irradiated by a dirty bomb. Your view of this situation will be dictated by one simple criterion: whether or not you watched the people jumping from the twin towers. …”