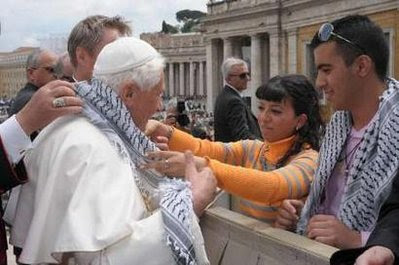 Via: Winds of Jihad & Atlas Shrugs

Pamela: The keffiyeh was Yaser Arafat’s swastika and became a powerful symbol of jihad. In the ensuing years, the keffiyeh as an icon of anti-Americanism, anti-semitism and anti-westernism took on a life of its own. The death-to-the-Jews marches across the globe during the Israeli defensive earlier this year were awash in keffiyehs from London to Paris, to New York, to Fort Lauderdale, to Bahrain, to Thailand …..well, you get the picture.

The fact is that accepting the keffiyeh is political correctness gone wild. Moral inversion, the inability to distinguish between right and wrong and between good and evil is the sickness in our society.

But the Pope? And while the argument will be made that it’s just a scarf, an Arab scarf, that is fatuous.

The swastika had been around long before the Nazis – archaeological evidence of swastika-shaped ornaments dates from the Neolithic period. Would Americans have worn a Nazi armband during World War II (or even now)?

Bottom line, just because the Pope pretends not to recognize the uniform does not mean it is not a uniform. The keffiyeh was the signature of Yaser Arafat and is the signature of Hamas and Hezbollah and the homicide bomber. Pretending it’s just a scarf is like pretending the klan’s white robe is a toga. Symbols mean something. Attempting to mainstream it, in effect softening its barbaric message, is an affront to every victim of Islamic jihad and the war we are engaged in.

There is a quiet jihad as powerful and as effective as violent jihad (if not more so) being waged on our culture, our economy, our schools, our freedoms.

Regardless of what it used to represent, and what it means to these Catholic Arab Christians now, the Keffiyeh has become the symbol of the jihad, Arab/Muslim Islamofacism, hatred and never should Westerners lower themselves by wearing it. Here’s what they think of Christians, and all dressed up in the checkered swastikas as an exclamation point. KGS