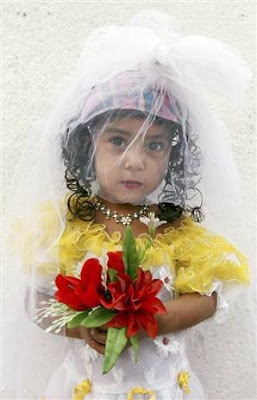 Baby bride: “Why does the West
prosecute those who speak the truth?”
Via: Jihad Watch
Saudi judge upholds 47-year-old man’s marriage to 8-year-old

(CNN) — A Saudi mother is expected to appeal a judge’s ruling after he once again refused to let her 8-year-old daughter divorce a 47-year-old man, a relative said. Sheikh Habib Al-Habib made the ruling Saturday in the Saudi city of Onaiza. Late last year, he rejected a petition to annul the marriage.
The case, which has drawn criticism from local and international rights groups, came to light in December when Al-Habib declined to annul the marriage on a legal technicality. His dismissal of the mother’s petition sparked outrage and made headlines around the world. The judge said the mother, who is separated from the girl’s father, was not the legal guardian and therefore could not represent her daughter, the mother’s lawyer, Abdullah al-Jutaili, said at the time.
The girl’s husband pledged not to consummate the marriage until the girl reaches puberty, according to al-Jutaili, who added that the girl’s father arranged the marriage to settle his debts with the man, who is considered “a close friend.”
In March, an appeals court in the Saudi capital of Riyadh declined to certify the original ruling, in essence rejecting al-Habib’s verdict, and sent the case back to al-Habib for reconsideration. Under the Saudi legal process, the appeals court ruling meant that the marriage was still in effect, but that a challenge to the marriage was still ongoing.
The relative, who said the girl’s mother will continue to pursue a divorce, told CNN the judge “stuck by his earlier verdict and insisted that the girl could petition the court for a divorce once she reached puberty.”

SPENCER: “To do otherwise would be to cast aspersions on Muhammad’s example — a “beautiful pattern of conduct,” per Qur’an 33:21 — in marrying Aisha when she was six and consummating the marriage when she was nine. Meanwhile, the girl can petition the court for a divorce… when she reaches puberty! “

Perhaps those who are interested, can email mailto:osmo@soininvaara.fi the former spokesman for the Finnish Greens, Osmo Soininvaara, who doesn’t believe that Saudi Arabia allows for girls 11 years of age to be married. According to the above article, if the girl is in fact, remains married, as soon as she menstruates (very possibly at the age of 11) the “groom” can bed her. KGS

Osmo Soininvaara: Let me know your thoughts
UPDATE: Soininvaara has now updated (without any mention about it his original statement) that in Saudi-Arabia there’s no legal age for marriage.