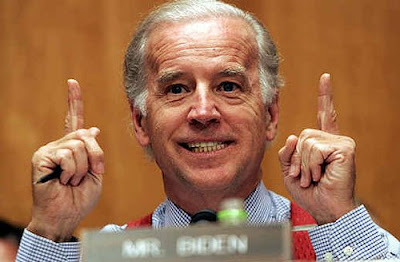 Joe Biden: My level of concern is no different than it was a year ago

So Israel should breath a collective sigh of relief that Biden’s concern is no different than it was a year ago? The Tundra Tabloids believes that, like any other state, Israel will do whatever it takes to secure its own safety. The Jewish state cannot afford to sit under the threat of an Iranian nuclear weapon, it’s that simple.
The Obama administration’s foreign policy for the region however, is proceeding along the assumption that the linchpin to peace in the Middle East, is by first solving the Israeli-Palestinian conflict. According to Obamalogic, once that’s solved, then all the other situations bedeviling the region will magically fall into place.
It’s a fools errand for a handfull of reasons, because (a) the regional Arab/Muslim players have every means at their dissposal to thwart Obama’s plans, (b) it’s not in their self interests to see the conflict end between the Palestinians and the Israelis, and (c) other conflicts and disputes in the Middle East have nothing at all to do with Jewish state.
The rise of fundamentalist Islam has nothing to do with the founding of Israel, and everything to do with Islam, and it’s supremacist, imperialistic tendencies. Islam is Islam, and it will never change if it’s followers are allowed to continue thinking their religion has a chance to over take the world. The rise of Islamic terrorism has nothing to do with an Israeli or a Palestinian state existing or not. Islamization of the world is an ongoing project, something of which B.Hussein Obama appears very keen on sidestepping.
Biden: New Israel would be ‘ill-advised’ to attack Iran

US Vice President Joe Biden said Tuesday the new Israeli government of Prime Minister Benjamin Netanyahu would be “ill-advised” to attack Iran, but stressed that it was unlikely to do so. “I don’t believe that Prime Minister Netanyahu would do that. I think he would be ill-advised to do that,” Biden said in an interview with CNN, when asked about possible Israeli strikes on Iranian nuclear sites.