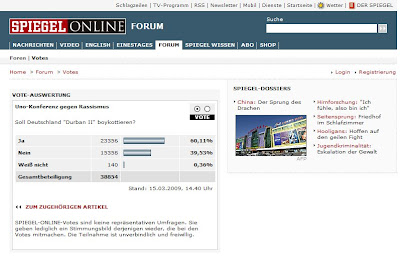 If you are truly in favor of human rights, then boycotting Durban II, the upcoming pseudo “human rights” conference set to convene in Geneva Switzerland next month, is the only sane course of action to take. The upcoming UN World Conference Against Racism is going to be a repeat of the Durban conference in S.Africa back in 2001, where civil-human rights issues were hijacked by the Organization of the Islamic Conference, which amounted to a total assault on the validity of the Jewish state of Israel.

Don’t be fooled, the OIC is not in favor of international human rights and against racism and bigotry, but only in the expansion of exclusive “Muslim rights” that will come at the expense of our own human civil liberties. Allowing the OIC to “get away with it” this time around, will doom minorities living in Muslim countries, to an existence that’s dependant on the “good will” of the Muslim majority.

When the OIC says it’s for the respect of religions and is against their defamation, it’s lying, the OIC chairman, Sec-Gen Ekmeleddin Ihsanoglu is not concerned about anti-Semitism at all, his only concern is to spread the myth of “Islamophobia”, in order to squelch debate and/or criticism of Islam, nothing more nothing less.

To prove that the OIC is being highly disingenuous with its concern about racism, I need only to point to the words already uttered by Ihsanoglu himself, who believes that only non-Muslims can be guilty of anti-Semitism, not the followers of Mohamed, whether they’re good or bad. Ekmeleddin Ihsanoglu, Helsinki, Oct, 7,2008:

“Sir you are under the wrong impression ….. you cannot speak about any Muslim, good or bad, as anti-Semitic, this is a theory, this is not the case.”

[There is a You Tube video of Ihsanoglu speaking those words available in the above link.]

That makes the OIC chief both a racist and a bigot. How in the world can the UN conference against racism be viewed as a genuine attempt to curb racism in the world, when the leader of the 57 member state organization has already ruled out the possibility of 1.5 billion people harboring anti-Semitic/racist views?

That is why the West needs to boycott Durban II, and any other conference the OIC cooks up as long as it denies the existence of Muslim anti-Semitism. Thankfully it looks like the German readers of Der Spiegel are of the same opinion. KGS