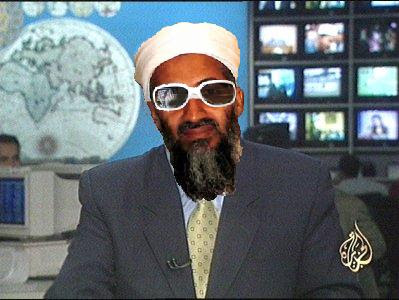 Bin-Laden: We both hate Jews, so it’s a perfect match!

Middle East thinking: When its Arabs killing Arabs, no matter what the reason or the number dead, it’s business as usual. When it involves non-Muslims, especially Jews, it’s a holocaust. The sad part is, that most of the Western media is in agreement with Bin-Laden’s ludicrous statement. KGS

Al-Qaida leader Osama bin Laden has called Israel’s offensive on Gaza a “holocaust” and blamed Arab leaders for not doing enough to stop the fighting in his latest audio recording aired on Al-Jazeera.
Bin Laden accused some Arab countries of “collaborating” with Israel on the offensive earlier this year that killed about 1,300 Palestinians in Gaza. He did not name any specific Arab countries in the brief audio recording played on Al-Jazeera Saturday.
The Arabic satellite network did not say how it obtained the recording, and the authenticity of the tape could not be verified.
It was the latest message from the terror leader since an audio message on Gaza in January. In that message, he urged Muslims to launch a jihad against Israel.

Here’s a link to the actual recording translated by Al Jazeera:

It is interesting that most of the time is spent condemning “rogue” nations’s governments that didn’t come to the aid (no doubt Egypt and Lebanon amongst them).

What is interesting about this message however, is that it specifically emphases forceful dissolve of Israel’s borders, unlike previous calls for Jihad in terms of Israel’s extermination.

In the light of recent political merging between Saudi Arabia, Syria and Iran despite religious schism, the specificity of this “call to Jihad” is more alarming than “usual”