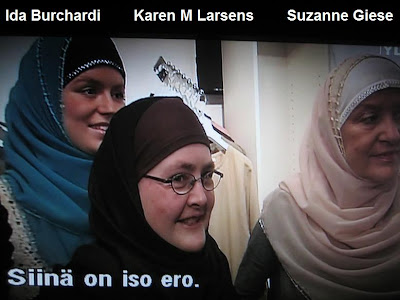 Finnish text: There’s a big difference.More buffoonish non-Muslim solidarity with fundamentalist IslamWhat happens when a fashion model, a Christian lesbian and a feminist starts to wear the Muslim headscarf? Three ethnic Danes, a fashion model, a lesbian Christian and a well known feminist want to experience what it’s like to be a Muslim woman for a day. In the first episode of the three part series on Finland’s Swedish language TV, FST5 (08.03.09), after only a day, (ex-)feminist, Suzanne Giese, comes to the conclusion that the Muslim headscarf can be interpreted as being a sign of a woman’s own personal identity. Both Giese and the fashion model, Ida Burchardi, are then surprised to find out that the Muslim women they had personally talked to, do not feel oppressed by wearing it. Imagine that! Both the feminist and fashion model also say that they experienced “uncomfortable” situations while wearing the hijab around town, with Suzanne Gisese stating that she was “coldly stared at by one man”. The Christian lesbian however, Karen Larsen, had the ‘politically incorrect’ experience, in that she wasn’t treated any worse while wearing the scarf while walking around town in the broad daylight. What’s also interesting is the conflict that developed outside the making of the documentary, between Suzanne Giese and Karen Larson. After the making of the film, Giese does not have as negative of an opinion about the headscarf as Larsen does, though the latter is not totally against the scarf herself, she just doesn’t think that it should be banned. Larsen does however, offer a window into the world of Muslim obfuscation and double speak when certain tough questions are asked during the taping. Larsen writes on her blog, in response to the accusations by the (now) pro-head scarf feminist:

Larsen: I was also with an open mind and I would be more than happy to learn from Samilla Qureshi, that was exactly why I was so disappointed by her unwillingness to respond properly to my questions. I asked repeatedly what was the religious duty element involved with going with the Muslim headscarf. When I asked repeatedly, it was because Samilla Qureshi always glided by my questions. A good example is actually part of the first broadcast. I ask Samilla Qureshi whether she believes that she will be rewarded by God by wearing the head scarf, and she replies that she does not become a better person by wearing it. It was not what I asked!

Larsen goes on further to add that important parts of the conversation with Samilla Qureshi, that would have added more depth to the program, ended up on the cutting room floor. Larsen explains:

“I was really sorry that it did not come with the conversation I had with Samilla in her home… it ended with her saying that homosexuality is unnatural, goes against God’s law and will lead to damage in the future life (ie going to hell) and that she had understood why Muslim families disown their gay children.”

But that’s not all! Read what she says about the store where they purchased their headscarves together. It helps to explain why a Muslim woman who never wore a headscarf outside of the mosque, now wears the fundamentalist type of head scarf that sports the special lip at the forehead.Karen Larsen:

Another source of frustration was the shop where we were each equipped with our Muslim headscarf, Islamic Impressions, had both books and journals for the free promotion of Hizb-ut-Tahrir standing, yes, in a highlighted space. Was it really necessary to visit such a shop? Perhaps, there probably are not as many shops selling Muslim head scarves, but I think we should have been given the opportunity to put distance to what the store stands for… […] And it obviously would have been interesting to hear what Samilla really thinks of the shop, was she looking forward to recruit for the Hizb-ut-Tahrir.

Larsen sounds like a really sensible woman and very knowledgeable about Islam, and Islamist organizations. The Hizb-ut-Tahrir is an international Islamic fundamentalist movement that wants to establish a world caliphate. Though they do not promote violence, their goals mirror that of al-Qaida’s and other like mined groups. This might help to explain her, Samilla Qureshi’s attraction to the headscarf, as well as other women living in the West who don that symbol of female oppression.This is not the first feminist to go over to the dark side, in her approval of a garment that has no clear religious mandate for wearing it, and is indeed forced upon women around the world. Take a look at EuropeNews, which has a plethora of information about the headscarf, as well as the TT’s good friend, Henrik Raeder Clausen’, essay on the matter. While there is nothing wrong per say, about a documentary about non-Muslim women wanting to understand a Muslim woman’s perspective, it’s very wrong for a documentary to skew the film into one direction, and not explore all the sides to the question of why women wear the religious garment. Henrik Clausen sends the translation of an article in the Danske Folkeparti’s website about the documentary, which contains a really good point:

“When Danish Muslims or ex-feminists don the headscarf, it is a profound lack of solidarity with for instance, Iranian women who risk capital punishment for not wearing it, or women in Bangla Desh, who risk acid attacks from headscarf-fanatical Islamists if they do not wear it.”

Ex-feminist, Suzanne Giese should take heed of what the Danske Folkeparti is saying, and end her foolish notion that Muslim women are not being forced or oppressed into wearing the headscarf. Samilla Quresh may not have been forced at gunpoint to wear the headscarf, but her mosque, that’s run by males, had everything to do with it. KGS