Skip to content
Home
/
2009
/
March
/
6
/
Piracy
/
Terror on the High Seas: UK Cruise Ship Narrowly Escapes Somali Pirates…….
Facebook
Twitter
Google+
LinkedIn
Pinterest
If not for the courage of the fearless crew the Balmoral would be lost
Cruise ship Balmoral zig-zagging to get out of harms way 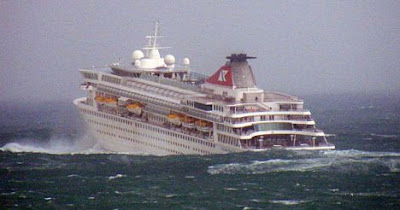 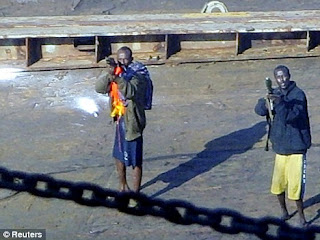 Thankfully a US naval ship was in the vicinity to escort the ship to safety. KGS

Terror for 1,200 Britons as Somali pirates

More than 1,200 British holidaymakers on a round-the-world cruise came under a terrifying attack from pirates armed with rocket launchers. The 715ft-long Balmoral came under fire four times from Somali bandits, a crew member said. The 43,000-ton cruise ship was forced to zigzag violently to evade its pursuers as the pirates gave chase in two small craft in the notoriously dangerous waters off Somalia. One crew member said in e-mails to her boyfriend back in Britain that the pirates circled the ship and came within 400 yards of the cruise ship, The Sun reported.

‘I stood on the deck and watched through binoculars at men in the fishing boat armed with AK-47 rifles and rocket launchers,’ she said. ‘People were all over the place and everyone was in tears. ‘We could hear shooting. It started following us and we had to call the US Navy.’ Many of the passengers ‘were in tears and frightened to death’, she added. The alert was raised on Tuesday morning when the boats appeared out of nowhere and closed in rapidly.

Alarmed by the ‘suspicious’ activity of the unidentified craft, the Balmoral’s crew made emergency calls, holiday firm Fred Olsen Cruise Lines said today. They also sent up distress flares and the ship’s staff toted fake ‘guns’ made out of pieces of wood, hoping the pirates would be deterred if crew appeared to be armed, according to reports.

The ship’s 1,300 passengers – 95 per cent of them British and mostly elderly – were then herded below deck into ‘safe havens’ on the Balmoral. The attack was only averted by the intervention of a U.S. Navy ship which escorted the cruise vessel through the perilous Gulf of Aden.

Via: women Against Sharia