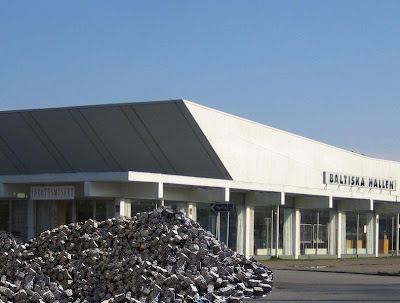 Remember, only one per nose

Ilya Meyer: “Just ahead of the Davis Cup tournament, a huge stockpile of granite cobblestones was delivered to a strategically selected area right outside the front gate of the Baltic Hall stadium in the city centre.”

The Swedes will let the Leftist loon thugs into the country, but if Malmö city hall had it’s way, four Israeli Jews would be barred. It’s an ironic “accident” that the pile of cobble stones were dumped right in front of the Baltiska Hallen (Baltic Hall), somehow the city planners subconsciously were on the same nihilistic page with the Muslims and the radical Socialists.
Ilya Meyer, a great friend of the Tundra Tabloids, alerted me about the post he has published today on his weblog. Read it all, especially the part where Meyer points out that the police show more concern for themeselves, than for the people they are supposed to be protecting. KGS
Swedish democracy falters on stony ground in Malmö

Saturday 7 March will see 10,000 rabid anti-democrats streaming into the centre of Malmö in southern Sweden. Their mission: to demonstrate their dissatisfaction with the fact that the Swedish government allowed four Jews from Israel to compete in the internationally acclaimed Davis Cup tennis tournament – a tournament that has played host to such stars as Björn Borg, Boris Becker and Andy Murray over the years.

The Swedish government, the Swedish police and the Swedish press all know about the forthcoming demonstration against Israeli Jews being allowed to play tennis in Malmö, where about 30% of the population is Muslim.

The consequences may be devastating for an already fragile Swedish democracy, a democracy that is already rocking on its heels after a synagogue was repeatedly set alight in the town of Trelleborg near Malmö, Jewish cemeteries have been vandalised, and pro-Israel and pro-democracy rallies in Malmö have been attacked by mobs wielding iron bars, rocks, rockets and glass bottles. In the presence of police.

What gives the situation added piquancy is the fact that the protests are against the admission into Sweden of Israeli Jews for the purpose of playing tennis, at the same time as a sizeable portion of the demonstrators are being imported from abroad, mostly from nearby Denmark and northern Germany, and furthermore that many of the demonstrators are in fact not Swedes by birth but recent immigrants from Muslim countries. The situation may thus develop into an international incident on a scale seldom witnessed in this otherwise quiet part of the world.

To this should be added that Malmö’s radical left-wing city council first tried to prevent the Jews from entering the city because they come from Israel, in a direct challenge to the country’s foreign policy as formulated by the centrist government in Stockholm. When that attempt failed, the city council banned all spectators from the match series this weekend, so the matches will be played in an empty stadium.

Malmö city council, which in these dire economic conditions has an even bigger financial deficit than most other Swedish cities, thus prefers to do without the massive earnings generated by ticket sales and in the city’s hotels and restaurants, in order to make its own foreign policy statement. Recently the same city council also banned a 45-strong team of Taekwondo competitors from participating in the Swedish championships because the team consisted of Jews from Israel. Another massive loss of potential earnings. Instead of being held accountable for gross mismanagement in these times of considerable financial difficulty, the city fathers are touting themselves as craftsmen of an alternative Swedish foreign policy – one directed squarely against the Jewish nation.

The demonstrators are of the opinion that Jews from Israel playing tennis on Swedish soil are an insult to Swedish sovereignty, the country’s much-vaunted democratic principles and its upright stance in support of human rights. These concerns over human rights have not resulted in mass demonstrations where such paragons of human rights as Saudi Arabia, Turkey, Venezuela, Burma, Cuba, China, Syria, Iran, North Korea, Zimbabwe, Libya, White Russia, the Congo, Sudan or Yemen are concerned. With these countries, Sweden enjoys close and well-established relations in the financial, cultural, sporting, diplomatic and research & development areas.

However, when four Jews from Israel arrive to play tennis, 10,000 demonstrators gather to voice their violent opposition. It certainly puts a new spin on the term “proportionality” – rather like the 1500 murderers that Hamas is insisting Israel free in exchange for one Israeli, Gilad Schalit, who the terror organisation kidnapped 1000 days ago. Fascists, anti-democrats and Islamists seem to love large figures.