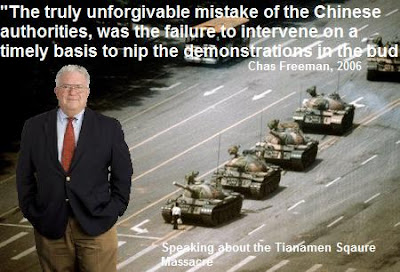 Obama’s choice for Chairman of the National Intelligence Council“The PRC army should have crushed the democracy supporters early on”
Debbie Schlussel writes that Obama’s recent choice to head the NIC, Chas Freeman, Jr. is “a supporter of anti-Semitic, anti-Israel, and pro-Chinese Communist sentiment, as head of the National Intelligence Council should disturb all Americans.”

Once again Obama’s troublesome background comes to light, as he consistently appoints some of the most objectionable candidates possible to influential positions inside his administration. No one wanted to enquire, or take seriously the reports about his formative years as a youth and young politician in Chicago, where he surrounded himself with radical Leftists, whose views are so outside the mainstream of US thinking, that if most knew about his choice of cronies, they would never have voted him into the Oval office. As president of the Arab lobbying group, Middle East Policy Council, (that gets most of its funding from the Saudi oil company, Aramco) Chas Freeman is responsible for the publication of the textbook, Arab World Studies Notebook. Yid With Lid states what kind of pearls of information can be found in the Arab funded textbook:

“Perhaps the most stunning of Chas Freeman’s History errors involves the history of North America: “….article [in the Notebook] in which Shabbas and someone called Abdallah Hakim Quick disclose that Muslims reached the New World in pre-Columbian times and spread throughout the Caribbean, Central America, South America and even Canada. By the time when Columbus arrived, it seems, the New World was fairly crawling with Muslims — and English explorers met “Iroquois and Algonquin chiefs with names like Abdul-Rahim and Abdallah Ibn Malik.” Do Quick and Shabbas cite any sources to support such claims? No, they don’t. They don’t even tell the names of the English explorers, let alone the titles and dates of the documents in which those explorers reported their encounters with Amerindian Muslims.” (You can read his full analysis here )

This is very typical of the Muslim (Saudi funded) onslaught of bogus historical revisionism they peddle around the world, in order to convince the gullible that Islam is a part of Western culture and not a foreign entity and ideology. The OIC’s chief propagandizer, Ekmeleddin Ihsanoglu did just that during his speech in a Helsinki seminar, sponsored by the Finnish Institute for Foreign Affairs, UPI, in which Islam was depicted as having a “shared history with the West, and also responsible for many of the West’s technical advances and achievements. Pure hog wash.Debbie goes further to say that:

Ashley Rindsberg writes about how Freeman was still doing biz with the Bin Ladens AFTER 9/11. This guy is gonna be writing Intelligence Reports for the Prez???!!! You want a guy who owes the Saudis and pimped vile anti-Semitic smear-papers by John J. Mearsheimer and Stephen M. Walt briefing the leader of the free world, every single day and culling which info the Prez sees and which he does not? Only if you want Islamic terrorists and Chi-coms to be promoted as our allies in national security matters. […]The Mearsheimer/Walt article and book are well known to be anti-Semitic diatribes–the modern day Protocols of the Elders of Zion, for which the two have been richly rewarded on the Arab Muslim speaking tour circuit. Mr. Freeman believes, as he said in a 2007 address to the Washington Institute of Foreign Affairs, that “Israel no longer even pretends to seek peace with the Palestinians; it strives instead to pacify them.” The primary reason America confronts a terrorism problem today, he continued, is “the brutal oppression of the Palestinians by an Israeli occupation that is about to mark its fortieth anniversary and shows no sign of ending.”

There is a very clear picture emerging about Barack Obama, as all the cards, one by one, are being placed on the table. BO is coalescing one the of the most Left leaning staff of foreign policy advisers in the history of the US presidency. There is a mighty rocky road ahead for the Israelis as “Team Obama” begin to dictate the new rules of the game. Thankfully the new government in Israel won’t be headed by Labour or Kadima, which would be more prone to dance to the Obama administration’s new tune for the region.One thing is for sure, with pro-Arabists in high positions in the US government, like Chas Freeman and Obama’s list of problematic foreign policy advisers, Israel is going to be pushed, shoved and pressured into accepting totally inappropriate and counter-productive measures in order to revive a dead “peace process” to the detriment of the Jewish state. KGS