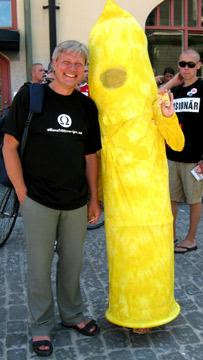 One size fits all Lars!

Sweden’s Left Party Lars Ohly tries to defend himself against accusations of antisemitism. And now the expected Leftist mantra:

Criticism of Israel is not anti-Semitism

Lars Ohly: I and the Left Party will continue to be at the forefront in the fight against racism and antisemitism.” “There are many people who over the years fought for democracy and against racist beliefs. I am proud that my own grandfather was one of them. […]

For me as a supporter of the Palestinian right to independence and opposed to Israel’s international crimes, it is important that the tone is clear. Criticism should always be directed against the State of Israel. The responsibility for keeping the tone in the debate on Israel-Palestine falls on both parties.

We are sympathetic to the Palestinian people’s struggle for their own country must always fight against anti-Semitic attitudes and conspiracy theories. Sometimes this limit is breached, and it is never acceptable.

According to a Tundra Tabloids’ Swedish source, Lars Ohly “is an idiot. Apparently his grandfather was a died-in-the-wool nazi.” So much for Ohly’s grandfather, I wonder if he is originally from the Malmö area, I hear it was a hot bed of pro-Nazi sentiment in the 30’s and 40’s. Here are a few quotes from Ohly’s second most favorite blog, Jinge.se, that promted his most recent op-ed in the Expressen. You judge for yourself whether or not Lars Ohly is sincere about his disgust for anti-Semitsm.

“If Obama hadn’t crawled before the Jewish Zionist mafia AIPAC & Co, we would never have heard of him, US policy is governed directly from Tel Aviv”.

“The Zionists has bought all resistance within the most important sectors of the world with the billions of dollars from the Holocaust industry”.

Swedish expert on ant-Semitism, Mikael Tossavainen, isn’t so convinced, by Ohly’s sincerity, stating on his blog:

“But what about that particular blog? Why doesn’t Mr Ohly see it fit to comment on the matter at hand? If he hadn’t declared his support for this one particular blog in the first place, he wouldn’t have had to make this statement. He wants to sound categorical and clear, and he does reject antisemitism — in theory. When it comes to an actual concrete example of anti-Jewish sentiments expressed by members of his party, he still chooses to avoid the issue.”

Lars Ohly is someone who throws his whole being into what he believes, he’s either thoroughly behind a project or an initiative 100%, or he’s not. So when he takes the time to write an op-ed telling of his disgust for anti-Semitism, yet fails to mention the incident that brought him into the situation at hand, what’s one to think.