Skip to content
Home
/
2009
/
February
/
15
/
Uncategorized
/
Former Finnish Greens Party Spokesman Osmo Soininvaara Approved Disgusting Anti-Semitic Comment on His Blog…….
Facebook
Twitter
Google+
LinkedIn
Pinterest
The Left has yet to jettison its racists. Osmo Soininvaara belongs to the Finnish Greens, though he no longer holds a position in the party, he still commands a lot of clout within the rank and file. Interestingly, while looking through a post on Soininvaara’s blog, the TT came across one of the most hate filled diatribes towards Jews and the state of Israel. 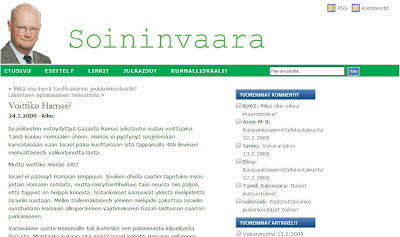 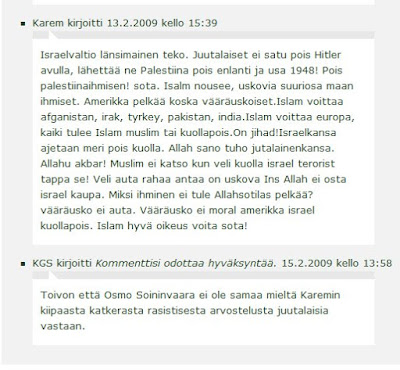 To which the TT enquired in the next comment: “I hope that Osmo Soininvaara does not agree with Karem’s racist diatribe against Jews.” Each post has to be approved by the editor, Osmo Soininvaara before it appears on his site. Obviously he approved of the comment, or at least the right for Karem to air his genocidal views. KGS UPDATE: Former Finnish Greens Spokesman Osmo Soininvaara responds: 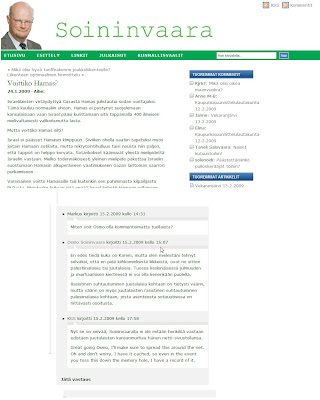 Markus wrote 15.2.2009 at 14:31 “Osmo, how come you haven’t commented on that?” Osmo Soininvaara wrote 15.2.2009 at 15:07 “I do not even know who Karem is, but I believe I made it clear that I do not like fanatical movements, whether they are Palestinians or Jews. In the middle of that mutual cruelty and murdering spiral I can not be on anyone’s side. Racist attitudes towards Jews is, of course, wrong, but Jewish racist attitudes towards the Palestinians is also wrong, and there has plenty indication of that attitude in the reporting on the war.” The TT then reminds him that: Now it’s clear that Soininvaara has nothing against someone leaving genocidal diatribes against Jews on his website. Great going Osmo, I’ll make sure to spread this around the net. Oh and don’t worry, I have it cached, so even in the event you toss this down the memory hole, I have a record of it.”UPDATE: He tosses it down the memory hole! Osmo Soininvaara then states that he doesn’t know how it was approved and then uploaded to his site, though it takes the editor himself to approve or disapprove anything submitted to his site. He’s been caught and doesn’t know how to admit his gross error in judgement by approving the text in the first place. What a scum bag. KGS