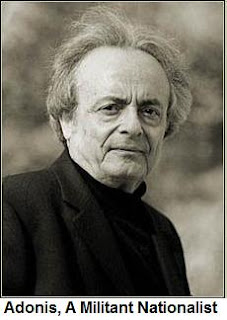 Professor Barry Rubin makes an excellent point that “while the Muslim Arab Middle East is not even at the starting point social, political, and intellectual modernity”,[…] “the West is still playing with marbles while the Islamists are playing for all the marbles”.

Ali Ahmad Said Asbar (pen name Adonis), maybe touted as a liberal, but in fact, the man is no liberal at all, but a hard core nationalist who hates the West and wants to keep the ME’s status quo of strong arm dicatatorships.

How ironic that the fate of the Arab/Muslim world rests with those -who for whatever the reason- continue to promote a vision for the Middle East that in no way brings it back from the brink of disaster it’s teetering on. The closest they can come, is a poet who favors current rulers who refuse to compete ideologically with the Islamic fundamentalists bent on driving them from power. KGS
WHEN THE “SECULARISTS” BURN THE “HERETICS”

Ali Ahmad Said Asbar is a name almost no one knows but everyone recognizes him by his penname Adonis. He is probably the greatest poet in the contemporary Arab world. On October 13, 2008, he gave a lecture at the National Library of Algeria. A Syrian who now lives in Paris focusing on two themes: the radical Islamist attempt to impose its interpretation of the religion is wrong and also that religion should not dominate society.

It isn’t surprising that Islamists objected strongly and even accused Adonis of being an “apostate”—a statement that is tantamount to calling for his murder. But Algeria’s minister of culture denounced him for,”ideological deterioration” and fired the library’s director for having invited him.

This incident will be presented—and rightly so—as an example of the denial of freedom of speech in the Arab world. But there is something else arguably even more important that won’t be mentioned: the ban on the freedom to seek solutions to the Arab world’s problems.

While the MEMRI article on the event (Special Dispatch 2226, February 4, 2009) identifies Adonis as a liberal, I don’t think that’s true though I understand why they said it. I would call him a militant Arab nationalist—though he wants more freedom and human rights at home—who opposes any peace whatsoever with Israel and hates the United States.

But that’s what makes this situation even more ironic. Adonis is not seeking to replace the existing regimes with pro-Western democracies; he’s largely on the side of the current rulers. The Algerian government fought and won a war against radical Islamists which cost tens of thousands of lives (and by the way, the world was indifferent to dreadful atrocities on both sides) and yet it cannot and will not fight the ideological war against radical Islamism.

To put it another way, the nationalists refuse to act in the way that their counterparts did in Europe, for example, in past centuries when they took on church domination. They fear Islam’s strength; they want to exploit it in a demagogic fashion.

The terrible truth is that the Muslim-majority Middle East is not yet, for most practical purposes, even at the starting point of social, political, and intellectual modernity. Indeed, this region is sunk so deeply into that syndrome that one of Adonis’s critics accused him of ignoring the alleged religious domination of everywhere else in the world by, “The Jewish rabbis in Israel, the religious people in the White House, or the pope in the Vatican, who heads a theocracy in the middle of Europe….”

This is partly the old accusation that any critic in the Arab world is part of the imperialist-Zionist conspiracy coupled with the fact that such people simply don’t comprehend what the rest of the world is like.

Western intellectuals are obsessed with self-criticism alone of their societies; Middle Eastern intellectuals either shun it or are forced to do so or lose their access to money and institutions. In understanding the battle that is raging, too much of the West is, so to speak, still playing with marbles while the Islamists are playing for all the marbles.

If the nationalists not only don’t counter the arguments of their Islamist enemies but use them even against their own allies, this system is doomed, at least in the long run. Adonis pointed out the irony of the fact that Algeria’s minister of culture is a woman who, if the Islamists and even mainstream clerics had their way, wouldn’t be in her post in the first place.

Again, though, as important as is the individual right to freedom of speech, the big loser here is Arab societies which cannot discuss openly how to escape from the morass of dictatorships, intransigence, violence, terrorism, and hatred.

What is equally said is that a large portion of the West—ironically, the left; the would-be peace lovers, and those who pride themselves on their morality—are joining in to defend the Islamists and exaggerate their moderation whenever possible. They, too, attribute criticism of the existing system and its real atrocities to Israel and the Jews, or to conservatives, or to (though the word isn’t used much) imperialist forces in their own countries.

It’s as if the supposed forces of progress had sided with the silencing of Galileo, for saying that the earth went around the sun, by the church. Well, actually most of the professors of the time did support it. Indeed, even in the West the ban on criticizing Islam has been extended. Many in the West make Israel and the Jews the scapegoats for the failures of the Arab-Islamic world just as their ancestors made the children of Israel the scapegoats for their own problems of modernization in Europe.

Arab intellectuals have started an online petition drive to defend freedom of speech and the freedom at least to advocate secularism. They cite a long list of intellectuals and cultural figures persecuted—or even murdered—by Islamists, and often their own nationalist governments, for speaking out. They ask for international support.

And yet we know what the protestors are busy doing—displaying their alleged love for Arabs and Muslims by supporting the Hamas Islamist dictatorship in Gaza and such things. They make up fictitious “war crimes” while ignoring tens of thousands of deliberate murders of civilians and of individual dissidents in Afghanistan, Algeria, Sudan, Lebanon, Iraq, and elsewhere; the repression of Iran; the imprisonments and torture in Syria.

The Arab advocates of freedom and progress, the counterparts of what the Western left claims to be, will wait in vain. The world as a whole will pay the price.