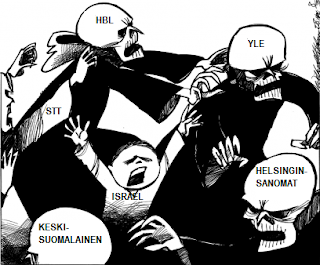 That’s typical of how the Finnish media handles any of the violence originating from the hands of the Arabs, keeping it first deliberately quiet or low key, then headlines ablazing when Israel responds to their aggression.
The Israeli response is typically reported on first, featuring prominently in the headline and in the first paragraphs of the story, then the Arabs’ actions what set things off in the first place are buried somewhere in the middle, and referred to as: “believed to have led to the Israeli strike“.
It’s a highly disingenuous game the media plays, which can be seen time and time again, with the more cynical envisioning just how the incident will be written well in advance, and be right. A Tundra Tabloid source sent in the following which is an excellent overview of how the big Finnish media outlets play the game.

The headlines did not blame the Hamas for violating the cease-fire, rather were more neutralized such as “Gazan tulitauko rikkoutui tiistaina” (HS), “Gazan tulitauko horjuu” (IS), “Gazan tulitaukoa rikottiin” (IL), and the well-biased YLE that have to mention Israel in each and every headline – “Israelin ilmavoimat iski Gazaan” – mentioning only in the content of the short article the road-bomb incident that triggered this air attack. I’m amazed how they manage to change the order of incident occurrences to fit their ideology. One can only imagine the headlines, had the cease-fire would have been violated by Israel. And … surprise surprise! YLE did not even mention this incident in their main 20:30 TV news. I say it again to make it clear – not a report, not even a side issue. nothing. A violation of the cease fire and nothing.

How true to form, and the traditional news media believes that their street cred is higher than ever! The people know better, and are looking to the Internet in ever increasing numbers for alternative news sources to the dreck that being promulgated by these highly corrupted and ineffectual news gatherers.

IAF aircraft struck three arms smuggling tunnels under the Philadelphi Corridor over Tuesday night.
The IDF Spokesman confirmed the strikes in an announcement, saying they were a response to a bomb attack against a military patrol along the border with the Gaza Strip which killed a warrant officer and wounded three others on Tuesday morning, including one who was severely hurt.
The IDF holds Hamas responsible for preserving the peace in Israel’s South, and will respond harshly to any attempt at undermining it, the announcement added. On Wednesdat morning, a Kassam rocket fired by Palestinian terrorists in the Gaza Strip landed in an open field in the western Negev.
On Tuesday the IDF had received a green light to respond harshly to the bomb attack, though defense officials would not provide details on the planned response, but said it would be in line with Israel’s new policy to respond aggressively to any attack following the end of Operation Cast Lead earlier this month.
A Beduin tracker was killed and an officer was seriously wounded when a large bomb exploded next to their patrol along the border near the Kissufim Crossing. Two other soldiers were lightly wounded. The bombing was the first lethal attack by the Palestinians since Israel withdrew from Gaza last week.