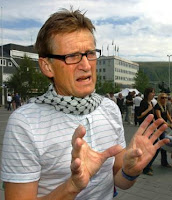 The reason for Gilbert’s refusal to “give one dime to Doctors Without Borders” is because the DWB refuses to be a part of a conflict, which runs counter to Gilbert’s ideological views. Like the TT has mentioned before, ‘Mad’ Mads Gilbert is a Leftist loon, who is very much a part of the Hamas war effort as the Palestinian stringers who feed reports to the international wire services.
The media however has been lapping it up, because they either believe or pretend to believe that they have an objective, unbiased Western professional (a doctor no less) rendering an accurate picture of the situation in Gaza.
The media however is not blameless, nor totally fooled. An anonymous source informed teh Tundra Tabloids that Finland’s main news station, YLE, has privately admitted that it had been badly misled, leading them into an untenable position, of having disseminated factually challenged information to the Finnish public, and needing to correct their reports. At the time of the information being handed to the TT, the “gate keepers” at YLE were busily scurrying to find a way to make things right without badly exposing themselves to justifiable criticism. KGS
The prominent doctor Mads Gilbert will not give as much as a dime to Doctors Without Borders.

Aftenposten: It was during a debate on the Culture of Tromsø Thursday night that Gilbert made the statement that he does not want to give money […] The reason was that Gilbert deeply disagrees with the Doctors Without Borders’ working on both sides of a war without taking a position on it. He disagrees with the stated political line. The organization is apolitical and independent.

Northern was repeatedly in contact with Mads Gilbert on Friday, but he did not want to elaborate or justify their stance. Gilbert has worked as a doctor during a series of conflicts abroad. Morten Rostrup of Doctors Without Borders says Mads Gilbert in several areas misses the mark when he criticizes the organisation.

– Mads Gilbert is a political activist and has a completely different way of thinking than Doctors Without Borders. Adding political guidelines as a basis for emergencies, you will come to ignore innocent civilians, “says Rostrup to Northern.

NOTE: Here is an essay from the Bookworm room, that takes a peek inside the minds of radicals, Leftists and hard core Marxists, exploring what may cause them to align themselves with a religious supremacist ideology that Hamas, Hezbollah and Al-Qaida represents. 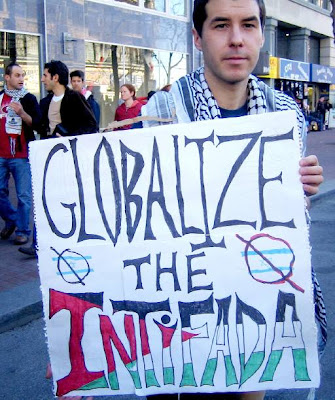 Bookworm room: “Globalize the Intifada.” “This is the fundamental message underlying all of these anti-Israel rallies organized by far-left radical groups:

[They see the Palestinian Intifada as the first wave of attack in a global revolution. Which, in their delusional fantasies, will usher in a secular communist utopia. This goes a long way toward explaining how left-wing groups can possibly give their support to Hamas, which is after all a repressive theocratic regime.]

If that theme doesn’t strike you as familiar, you’re either fairly young, or you’re not thinking about it hard enough. It is, in fact, Charles Manson’s Helter Skelter theory, played out on a global scale. As you may recall, there was a method behind the Manson murders. Manson had convinced his followers that it was their mission to instigate a race war between blacks and whites in America, not because he had a dog in either fight, but because he believed that, once the combatants had destroyed each other, his little group would emerge triumphant from the chaos and take over the world.

We all freely acknowledge that Manson was insane, and that his followers were too (or, at least, they were in the grip of a temporary insanity while under his sway). It was this insanity that led them to commit murders of unspeakable brutality, and to do so with unbridled glee. Their craziness, aside from firing their blood lust, left them incapable of grasping that, when countries or cultures self-immolate, very little emerges from the ashes but further chaos and death. (I give you large parts of Africa as Exhibit A to support that statement.)

It’s sadly obvious that those Communists who waltz with the Islamists in their hope to see a world engulfed in flames are subject to precisely the same delusion that drove Manson and his followers. Despite the manifest insanity of their view, they’re vocal in their belief that they’re the Phoenix, and it’s up to them to stoke to fire to create the ashes. One wonders were it will end. Manson’s mania-driven murders numbered in the double-digits. If these fellow-travelers have their way, mere millions of deaths may ultimately seem like small numbers.”