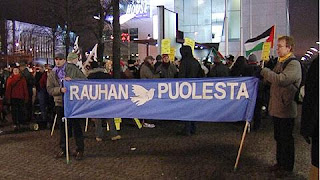 Oh how tiny was their number.
They could only manage to get a 100 tin hats to walk the streets of Helsinki and show their stupidity to the public at large.
To the Tundra Tabloids’ satisfaction, in spite of the intensive brainwashing by the Finnish media on behalf of Hamas, only a measly handful of pro-Hamas supporters turned out to protest against Israel’s ongoing self defensive operations in Gaza.
al-YLE: About 100 demonstrators marched from central Helsinki to the Israeli Embassy on Monday to protest the country’s military strikes against the Gaza Strip. The protesters gathered outside the Kiasma Museum of Contemporary Art at 5 pm before marching to the Israeli mission. Police say the event passed off peacefully and lasted about half an hour. It was organised by two NGO’s, the Arab Peoples’ Friendship Association and Pro Palestina.

The Orwellian named group, Rauhanpuolustajat (Defenders of Peace), were also present at the march as well, it’s their banner being held in the picture. Taking a look at their website, one begins to understand the collusion between these radicals and the news media, whose news reports are for the most part, indistinguishable from the talking points of these far Leftist activist groups. Here is an example of their nonsense that could be mistaken as a YLE news report, or an editorial from the newspapers of the Helsingin Sanomat or the Keskisuomalainen.

Finland’s Rauhanpuolustajat is dismayed by the Israeli assault on Gaza. Systematic slaughter is not in any way defensible, and in the densely populated Gaza Strip a large proportion of the victims are innocent civilians. Rauhanpuolustajat also agrees with an Israeli peace movement’s appeal for an immediate ceasefire.

Lasting, mutually binding cease-fire can be achieved, but it also requires an end to the blockade of the Gaza Strip and a half million exhausted Palestinians, as well as Israel respecting the Palestinians’ right to choose their own leaders.

In spite of signed agreements which forbade the participation such groups like Hamas, Israel respected the Palestinians’ right to choose their leaders. However, Israel is under no obligation to respect a political group that is actively working to destroy the Jewish state.

These tin foil hat morons obviously have no problem with Hamas launching rockets into Israel for the last two years, nor with their calls for the genocide of the Jews. These people who call themselves “Defenders of Peace” are a disgrace and should be called “Supporters of Jihad”.It comes as no surprise that many Finnish journalists and politicians lend their time and money on groups likes this. Pure buffoonery to the umpteenth power. KGSNOTE: The TT originally included in this post a sizable reference to the Left’s penchant for supporting genocidal totalitarian regimes, but then decided to leave it out for not wanting to detract from the main theme. But then Vasarahammer pays a visit and left the following comment.Vasarahammer: Most of the people (at least those who remember Cold War and Finlandization) know that Rauhanpuolustajat used to be a cover for the Communists to promote “peace” i.e. unilateral disarmament of the West. The Soviet missiles were “peace missiles” and no threat to anyone according to Rauhanpuolustajat. It is unlikely that the organization has ever distanced itself from its past.”Great minds think alike. I was not in danger of wrongly maligning the Suomen Rauhanpuolustajat, because indeed, these doughy headed idiots consistently fall on the wrong side of history time and again. So it stands to reason why they would defend a bunch of neanderthal religious supremacists who hope to implement a totalitarian society on the ruins of Israel if their genocidal plans ever become a reality. From this time forward, the TT will refer to this group as the Finnish Supporters of Perpetual Warfare (Jihad).