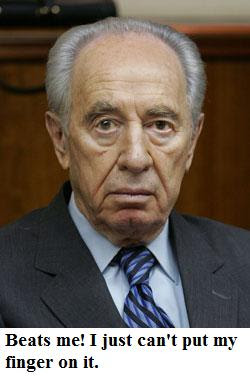 From Robert Spencer via The Winds of Jihad.

Mr. Peres, I am very glad to clear this up for you. The Hamas Charter quotes the founder of the Muslim Brotherhood in this way: “Israel will exist and will continue to exist until Islam will obliterate it, just as it obliterated others before it” (The Martyr, Imam Hassan al-Banna, of blessed memory).

The Islamic Resistance Movement is a distinguished Palestinian movement, whose allegiance is to Allah, and whose way of life is Islam. It strives to raise the banner of Allah over every inch of Palestine, for under the wing of Islam followers of all religions can coexist in security and safety where their lives, possessions and rights are concerned.

That security and safety is elucidated by the Qur’an, in which Muslims are told to “fight those who believe not in Allah nor the Last Day, nor hold that forbidden which hath been forbidden by Allah and His Messenger, nor acknowledge the religion of Truth, even if they are of the People of the Book, until they pay the Jizya with willing submission, and feel themselves subdued.” (9:29) So once the rule of Islamic law is established over all the land of Israel, and the Jews pay the jizya tax with willing submission and feel themselves subdued, accepting a status of inferiority (dhimmitude) vis-a-vis the Muslims, their security and safety will be secured — as long as they don’t get out of line.

That is what Hamas’ goals are: the destruction of the Jewish state and the subjugation of the Jews under the rule of Islamic Sharia. That’s why it continues to fire missiles from Gaza.
Happy to be of service, sir!

“Peres: There’s no logic to Hamas rocket attacks from Gaza,” by Barak Ravid for Haaretz, December 30 (thanks to DW):

Prime Minister Ehud Olmert and President Shimon Peres held a meeting on Tuesday morning at the President’s Residence in Jerusalem. The premier updated Peres on the latest developments as the Israel Defense Forces offensive in Gaza enters its fourth day….”Israel is not fighting the Palestinian population but a terrorist organization whose raison d’etre is continued violence and destabilizing the region,” said Peres, who also remarked that Hamas bears responsibility for the situation unfolding in Gaza.

“Nobody in this world understands what are Hamas’ goals and why it continues to fire missiles,” the president said. “This shooting has no point, no logic, and no chance.”
Israel wants end to ‘terrorism,’ not Gaza truce: Peres
(AFP) 30 December 2008

JERUSALEM – Israeli President Shimon Peres said on Tuesday that the Jewish state wanted “a stop to terrorism” rather than a truce in the Hamas-run Gaza Strip, where it pummelled the Islamists for a fourth day.

“What we want is not a ceasefire but a stop to terrorism,” Peres said in televised comments. “This war does not resemble any war that we have waged in the past,” he said. “This is a very difficult operation against terrorists. I suggest to the people not to underestimate the enemy.”
Israel has shrugged off mounting international calls for a ceasefire in Gaza, with Infrastructure Minister Benjamin Ben-Eliezer telling AFP: “There is no reason that we would accept a ceasefire at this stage.”