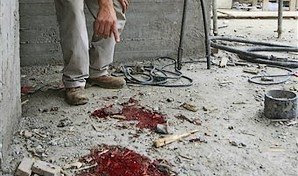 Five Israelis were wounded on Monday night – one critically, one seriously and three lightly – when a rocket fired by Gaza terrorists hit an Ashdod bus stop. The casualties were evacuated to Barzilai Hospital in Ashkelon. The rocket was one of over 70 fired at southern Israel Monday.
In another of the attacks, Hanni Al-Mahdi, 27, of the Beduin town of Aroer in the Negev, was killed and at least 14 people were wounded when a Grad-type missile hit a construction site in Ashkelon’s center.”
Hamas shows just how much contempt they have for human life, not only for Israelis, but for their own people as well. Palestinian Media Watch:

Hamas explains using civilians as human shields: “We desire death as you desire life.” [Feb. 29, 2008]
by Itamar Marcus and Barbara Crook The UN announcement that 51 civilians have died in the conflict in Gaza must be understood in the context of Hamas’s declared ideology to use civilians as human shields for Hamas fighters. Indeed, Hamas continues to emphasize and promote the religious ideology that death for Allah is an ideal to be actively pursued. The goal is to convince Palestinians, including women and children, not to fear death but even to face it at the front to protect Hamas fighters. Hamas’s placement of its military installations and fighters among civilians reflects this ideology, and has led to these 51 deaths. A Hamas representative in the PA legislative council this year expressed pride in the fact that women and children are used as human shields in fighting Israel. He described it as part of a “death industry” at which Palestinians excel, and explained that the Palestinians “desire death” with the same intensity that Israelis “desire life.” The following is the full text of the comments by Hamas representative Fathi Hamad: “For the Palestinian people death became an industry, at which women excel and so do all people on this land: the elderly excel, the Jihad fighters excel, and the children excel. Accordingly [Palestinians] created a human shield of women, children, the elderly and the Jihad fighters against the Zionist bombing machine, as if they were saying to the Zionist enemy: We desire death as you desire life.”

UPDATE: Send in the clowns, I mean, you’ve got to have clowns.