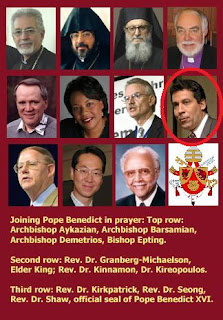 The hypocrisy of this organization is astounding, its press release talks of Christian Zionism as a dangersous ideology becuase it’s a “manipulation of Christian scripture and teaching”
Oh I see, for centuries Christians were persecuting Jews due to a handful of Christian scriptures, but now when a sizeable amount of Christians around the world deem the only Jewish state in existence, worth defending, due to Christian scripture no less, that’s got to be bad somehow.
Dr. Antonios Kireopoulos, NCC Senior Program Director for Interfaith Relations (circled in red) “Unfortunately it has influence in American churches, to the point where many well-meaning Christians are swayed to support particularly destructive directions in U.S. foreign policy with regard to the Middle East.” Read it in full here.
So these naughty Christians who find a natural solidarity with a Jewish state over tyrannical Islamic supremacists who are trying murder Jews and destroy Israel, are the ones straying from the path of the true faith, not the dithering idiots who run the National Council of Churches.
I can only hope that NCC experiences such a drop in support that would cause them to snap out of their stupidity. These are same oafish boars that believe in interfaith dialogue with Islam will produce a kinder and softer Islam, in spite of the fact that the Islamic world spits in the eye of the Christian world, repeatedly.
What we see rather, is the mass exodus of Arab Christians from the ME continuing unabated, the restrictions on church building in force throughout the ME while Islamic leaders seek to protect Islam from any kind of criticism, and with the NCC’s help, whose ongoing dialogue with Islam is as fruitful as Europe’s dialogue with the Iranian regime. More here. KGS