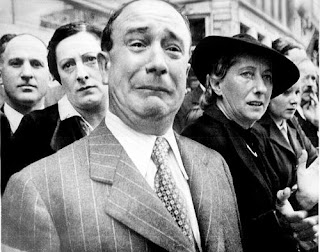 History repeats itself, but this time without the saviour of Europe, Charles Martel to help Europe in its most crucial hour. Known as the Hammer, Charles Martel engaged a superior force of Muslim invaders at the Battle of Tours in 721, and delivered the invading army a resounding defeat. Martel saved Europe from Islam, but in today’s world, Europe seems destined to impale itself on its own sword of self hate and stupidity.
If Martel were alive today, and unable to do anything about the Islamization of Europe, he would be weeping as much as the Frenchman in the picture when Hitler’s National Socialist forces marched through France.

Charles Martel Defeated: A Grand Mosque for ToursBrussels Journal: Two French websites – Islamisation, administered by Joachim Véliocas, and Bivouac-Id – have posted reports on the laying of the first stone of the new Grand Mosque of Tours. Notable among the dignitaries present were the Algerian Minister of Religion, the Socialist mayor of Tours, Jean Germain, and… the archbishop of Tours, Monsignor Aubertin.Tours will have its Grand Mosque when the 5 million euros necessary for its financing have been found – in 3 years, at the earliest. A quarter of the sum has already been collected. The land was purchased by the Paris Mosque, subsidized by Algeria. On November 29, 2008, amidst great ceremony, the first stone was laid. In 732, a Muslim army was defeated outside the city of Tours by Charles Martel and the Franks. The Battle of Tours was one of the most decisive battles in history since it stopped the Islamization of Europe (at least for 13 centuries). Adolf Hitler bitterly regretted that the Muslims had not won in Tours.The Algerian Minister of Religion, Bouabdallah Ghlamallah made a stopover in Tours to attend the laying of the first stone of the Grand Mosque of Tours, before taking off for Saudi Arabia… a land where the practice of Christianity is forbidden, as in Algeria where spreading it is punishable by heavy fines and prison sentences! But Algeria will contribute up to 490,000 euros towards financing the mosque. More here. KGSH/T: Baron Bodissey