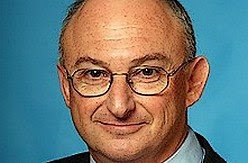 The hope of Israel. Go Eldad go! The Zionist movement at its core, holds to the solid belief that only a Jewish state, that embodies both the culture and identity of the Jewish people, can secure the future for the Jewish people.
Arye Eldad embodies that classical spirit of Zionism, which envisions a Jewish state of being both accepted and living at peace with its Arab neighbors, but not at the expense of losing its Jewish character.
Any talk of Israel being accepted as long as it jettisons its Jewish character, and become a bi-national state, should be rejected as being antisemitic in both thought and deed. No other state in existence rests its future on how others interpret its character and national identity, nor then should Israel.

J’lem Post: MK Arye Eldad, who is currently with the National Union-National Religious Party but has founded the new Hatikva Party, says he is planning to introduce a package of emergency “anti-Islamization legislation” in the next Knesset to “confront the enemy within and without.” The legislation would make military or civil service obligatory for both Arab and Jewish citizens, require all citizens to declare their loyalty to Israel “as a Jewish democratic state” as a condition for voting in national elections and ensure punishments are meted out for illegal construction, which is rife in the Arab sector. “I am trying to preserve the state of Israel as a Jewish state,” Eldad told The Jerusalem Post on Tuesday. “I’m trying to struggle against both a post-Zionist trend and the trend of ‘Islamization’ of some citizens of Israel, who are saying we no longer need a Jewish state and that this should be a binational state of Jews and Muslims.”

But of course Israeli Arab Muslims are not buying it, they can’t allow for a Jewish state to exist, they want only Islam to rule. They’ll opt for the short term, bi-national state, then destroy that one as they did the Jewish one, and replace it with an Islamic state. Now mind you, the following words are mouthed by an Arab that is an Israeli citizen and parliamentary member of the Israeli Knesset.

MK Ibrahim Sarsour, head of the United Arab List-Ta’al, said that he and other Arab activists will do everything possible to ensure that Eldad’s “discriminatory” legislation package, if introduced, does not pass. The legislation, Sarsour said, would lead to the exclusion of the Arab minority from the Israeli system, something the community “will not accept.” But even if it does pass, Sarsour said, “we will go on struggling within the limitations of Israeli law by peaceful means, [so] that Israel will be a state of all its citizens, not a Jewish state or a state of the Jewish community” in which Arabs are “simply a passing minority.”

Riiiiight, a bi-national state. The destruction of the Jewish state is never far from the thinking of these religious supremacists, who feign concern for discrimination, but are very open about their desire for the destruction of the world’s only Jewish state. They use the same ploy in the West as well, with Muslims feigning concern over ‘civil rights’ while working towards the goal of Islam being the dominant force. In other words, concern over civil rights only works one way, after hegemony is achieved, concern for human civil rights in the liberal sense, is no longer an issue. KGS