Andrew Bostom is well known for the nack of fleshing out the details while highlighting the buffoonery of those in whom the rest of the world places such ill deserved esteem and trust. Take for example Mohamed El-Baradei Clouseau, the winner of the Nobel prize who now states that:

“Efforts made over the last five years by the international community to harness Teheran’s nuclear program have failed”.

But not to worry, he hopes that the US led West will create a “grand bargain” with Iran which would eventually lead to an eventual settlement! KGS 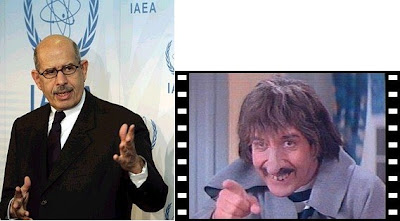 Do you know what kind of a bomb it was (will be)?(El-Baradei) Clouseau: “Yes, the exploding kind.”

Efforts made over the last five years by the international community to harness Teheran’s nuclear program have failed, the world’s chief nuclear inspector [Clouseau] admitted. International Atomic Energy Agency [IAEA] head Mohamed El Baradei [Clouseau] told the LA Times on Saturday that “We haven’t really moved one inch toward addressing the issues” and said that he thought “the policy [READ: HIS and that of the IAEA he heads!] has been a failure.”

Bostom: And it is potential victims of Iranian nuclear aggression who are at fault for his/the IAEA’s admitted failure—but his/the IAEA’s failed Clouseau-like efforts must continue (to fail), at any rate!

Addressing the series of sanctions imposed on Teheran as a response to its refusal to end its nuclear development, Baradei said that these actions have perhaps caused a “more hardening of the position of Iran… Many Iranians who even dislike the regime [are] gathering around the regime because they feel that country is under siege.” Despite this position, Baradei insisted that the path of diplomacy is the correct form of solution and that international trust is what will prevent the spread of nuclear weapons.

In this context, Baradei indicated that he hoped Iran and the US could begin talking. In order to arrive at what he called a “grand bargain,” the West must give Teheran “the power, prestige and influence” it desires. Baradei said he felt positive that Iran and the West would eventually reach a settlement.

Bostom: And of course El-Baradei Clouseau dismissed the ad nauseum threats various Iranian religious and political leaders have made to annihilate Israel with nuclear weapons, including the “moderate Rafsanjani” and the “less moderate Ahmadinejad” :

Baradei used the opportunity to reject claims Iran planned to use nuclear weapons against Israel.