Andreas Liveras, a British self made millionaire in the yachting business, was shot dead after making a telephone call, in which he was describing the chaos in the Taj Hotel. He was visiting in Mumbai for a boat show, and now have been confirmed as one of the victims brutally gunned down in cold blood. More here. KGS
Breitbart: One man who did not survive was 73-year-old Andreas Liveras, who gave an interview to the BBC by phone while he was stuck inside the Taj Mahal. He said that as he was speaking, “The last bomb exploded about 45 minutes ago and it shook the hotel up. Nobody comes in this room and nobody goes out, and we don’t really know.” Liveras was later confirmed dead. The Cyprus News Agency quoted his brother saying he had been “assassinated in cold blood”. 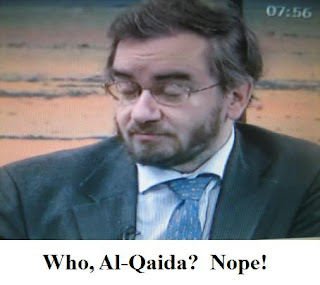 On another note. Today on Finnish MTV3, the supposed “expert” on all things related to Islam, Jaakko Hämeen-Anttila, the very same Finnish “expert” that believed the Motoons crisis would soon dwindle after it started, believes that Al-Qaida was not involved.

One has to remember though that the hallmark of an Al-Qaida attack are simultaneous assaults, something of which this terrorist operation in Mumbai had in full.

Hämeen-Anttila also poo-pooed the idea that Pakistan government was involved, “India is always blaming the Pakistan government no matter what happens.” He also defines these examples of Islamic terrorism within a domestic context only, not within the international global jihadi movement, because if the opposite were true, it would undermine his version of Islam. His anlaysis can be shown to be WAY OFF BASE, due to the fact that some of the terrorists were known to be British citizens of Pakistani origin, which makes it an international terrorist attack.

That’s the kind of “experts” we have here in Finland, people like Jaakko Hämeen-Anttila, who continually diminish the role Islam itself plays in these kind of terrorist attacks. Lets all remember the Tamil Tigers, and the Sikh separatists who have committed acts of terror, but they are not a part of an international movement that commits atrocities under the terrorist pirate flag of Al-Qaida.

Yes other extremist groups exist, but none of them have any grander ideas outside of their own immediate vicinity, that’s what makes Al-Qaida the chief suspect here, and once again, Jaakko Hämeen-Anttila will be proven wrong again. KGS

NOTE: Debbie Schlussel has a moving perspective of the Jews murdered at the Lubavitch Chabad House in Mumbai. “They’re all gone”.

Atlas Shrugs has more as well: Fears have grown that the Chabad rabbi and his wife in Mumbai has been killed. Indian helicopters dropped commandoes on the roof of the Chabad House in Mumbai early Friday morning, and a battle is continuing at this moment. Three blasts were heard inside the building, where four terrorists remain. One was killed in an earlier battle. It is thought that no more hostages are being held inside.An Indian newspaper has reported that Chabad-Lubavitch emissary Rabbi Gavriel Holtzberg and his wife Rivka were murdered by Muslim terrorists who held them hostage. The Chabad couple’s two-year-old son Moshe was taken out of the building by his babysitter shortly after the siege began Wednesday night.UPDATE: They’re dead, murdered in cold blood, but if they happened to be Muslims, well, they would have been spared. Atlas has gave the link to the NY Post story.