Skip to content
Home
/
2008
/
November
/
27
/
Uncategorized
/
More on Mubai: Andrew Bostom: “Ethos” of the Mumbai Jihad on Chabad? “Whenever a Jew is Killed it is For the Benefit of Islam.”…….
Facebook
Twitter
Google+
LinkedIn
Pinterest 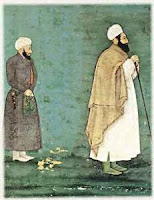 Hat tips to [2] Pamela Geller and [3] Bob Spencer regarding this [4] story about an apparently targeted attack on a Chabad House in Mumbai by the jihad terrorists wreaking carnage in that great Indian city.

This tragedy within a much larger tragedy reminded me of the Indian Sufi “inspiration” for The Legacy of Islamic Antisemitism, Ahmad Sirhindi. Nearing completion of my first book compendium, The Legacy of Jihad, in early 2005, specifically the section about jihad on the Indian subcontinent, I came across a remarkable comment by the Indian Sufi theologian Sirhindi (d. 1624). Typical of the mainstream Muslim clerics of his era, Sirhindi was viscerally opposed to the reforms which characterized the latter ecumenical phase of Akbar’s 16th century reign (when Akbar became almost a Muslim-Hindu syncretist), particularly the abolition of the humiliating jizya (Koranic poll tax, as per Koran 9:29) upon the subjugated infidel Hindus. In the midst of an anti-Hindu tract Sirhindi wrote, motivated by Akbar’s pro-Hindu reforms, Sirhindi observes, “Whenever a Jew is killed, it is for the benefit of Islam.”

The biographical information I could glean about Sirhindi provided, among other things, no evidence he was ever in direct contact with Jews, so his very hateful remark suggested to me that the attitudes it reflected must have a theological basis in Islam—contra the prevailing, widely accepted “wisdom” that Islam, unlike Christianity was devoid of such theological Antisemitism. Having originally intended to introduce, edit, and compile a broader compendium on dhimmitude in follow-up to The Legacy of Jihad, this stunning observation inspired me instead to change course and focus on the interplay between Islamic Antisemitism, and the intimately related phenomenon of jihad imposed dhimmitude for Jews, specifically.

Of course Jew-hatred was merely a sidelight to Sirhindi’s hatemongering Islamic “ethos.” He was an intensely anti-Hindu bigot, as revealed by these words:

Cow-sacrifice in India is the noblest of Islamic practices. The kafirs [Hindus] may probably agree to pay jizya but they shall never concede to cow-sacrifice…The real purpose in levying jizya on them [Hindus] is to humiliate then to such an extent that, on account of fear of jizya , they may not be able to dress well and to live in grandeur. They should constantly remain terrified and trembling. It in intended to hold them under contempt and to uphold the honor and might of Islam…