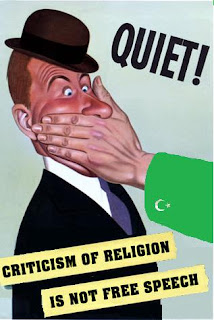 The OIC sponsored measure puts the West one step closer in accepting strict limits on its free speech rights. To all those who say “tosh” to the notion (read=conspiracy) that ‘Islam is slowly but surely trying to subvert the West’s liberal societies, I say, there is wisdom in paying closer heed to the details.
Just the other day, Robert Spencer noted the following, which clearly shows that there is indeed a highly orchestrated plan to subvert the West from within.

“It was during the first Holy Land Foundation trial last year that the Muslim Brotherhood memorandum about their “grand jihad in eliminating and destroying Western civilization from within” came to light.”

This is nothing to do with far fetched conspiracy theories patterned from, or at the least, reminiscent of, the protocols of the Elders of Zion forgeries. Just as in war when a dawn raid happens to uncover the enemy’s battle plans, so to have US law officials uncovered Muslim Brotherhood manuals designed to frustrate and subvert Western society from within.

The UN anti-blasphemy measures are just one phalanx in a long line of probes and thrusts from a combined Islamic effort that seeks to whittle away at the West’s resolve and hard earned freedoms, to benefit Islam, whether they be hardcore believers or indifferent to tradtional Islamic practices.

UN anti-blasphemy measure a threat to free speech, critics say
Steven Edwards, Canwest News Service
Published: Tuesday, November 25, 2008
UNITED NATIONS – Islamic countries yesterday won United Nations backing for an anti-blasphemy measure that Canada and other western critics say risks being used to limit freedom of speech. Combating Defamation of Religions passed 85-50 with 42 abstentions in a key UN committee, and will enter into the international record after an expected rubber stamp by the plenary later in the year. But while the draft’s sponsors say it is aimed at preventing violence against worshippers regardless of religion, religious tolerance advocates warn the resolutions are being accumulated for a more sinister goal.
I’d rather be deemed a fool by the majority for worrying over our precious freedoms, than as a genious mourning with the majority over the loss of them. KGS