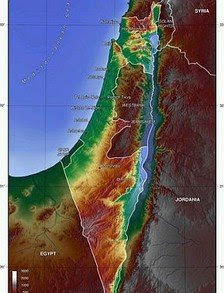 Here’s something you don’t see everyday, an op-ed that lays out the entire truth behind the Israeli-Arab conflict, informing the ignorant and shaming those that already knew better.
It’s such a well written letter, that it alone can be used to dispell the nonsense pro-Arab propagandists have peddled for years. How refreshing, and in full. Read and Learn! KGS

From the Jerusalem Post.
Israel ‘occupies’ no Arab territories

In urgent matters of national survival and geopolitics, words matter. The still generally unchallenged language referring provocatively to an Israeli “Occupation” always overlooks the pertinent and incontestable history of the West Bank (Judea/Samaria) and Gaza.

Perhaps the most evident omission concerns the unwitting manner in which these “Territories” fell into Israel’s hands in the first place. It is simply and widely disregarded that “occupation” followed the multi-state Arab aggression of 1967 – one never disguised by Egypt, Syria or Jordan.

Even as a nonstate legal entity, “Palestine” ceased to exist in 1948, when Great Britain relinquished its League of Nations mandate. During the 1948-49 Israeli War of Independence (a war of survival fought because the entire Arab world had rejected the authoritative United Nations resolution creating a Jewish state), the West Bank and Gaza came under the illegal control of Jordan and Egypt respectively. These Arab conquests did not put an end to an already-existing state or to an ongoing trust territory. What these aggressions did accomplish was the effective prevention, sui generis, of a state of Palestine. The original hopes for Palestine were dashed, therefore, not by the new Jewish state or by its supporters, but by the Arab states, especially Jordan and Egypt.

LET US return to an earlier history. From the Biblical Period (ca. 1350 BCE to 586 BCE) to the British Mandate (1918 – 1948), the land named by the Romans after the ancient Philistines was controlled only by non-Palestinian elements. Significantly, however, a continuous chain of Jewish possession of the land was legally recognized after World War I, at the San Remo Peace Conference of April 1920. There, a binding treaty was signed in which Great Britain was given mandatory authority over “Palestine” (the area had been ruled by the Ottoman Turks since 1516) to prepare it to become the “national home for the Jewish People.” Palestine, according to the Treaty, comprised territories encompassing what are now the states of Jordan and Israel, including the West Bank and Gaza. Present-day Israel comprises only 22 percent of Palestine as defined and ratified at the San Remo Peace Conference.

In 1922, Great Britain unilaterally and without any lawful authority split off 78 percent of the lands promised to the Jews – all of Palestine east of the Jordan River – and gave it to Abdullah, the non-Palestinian son of the Sharif of Mecca. Eastern Palestine now took the name Transjordan, which it retained until April 1949, when it was renamed as Jordan. From the moment of its creation, Transjordan was closed to all Jewish migration and settlement, a clear betrayal of the British promise in the Balfour Declaration of 1917, and a patent contravention of its Mandatory obligations under international law.

On July 20, 1951, a Palestinian Arab assassinated King Abdullah for the latter’s hostility to Palestinian aspirations and concerns. Regarding these aspirations, Jordan’s “moderate” King Hussein – 19 years later, during September 1970 – brutally murdered thousands of defenseless Palestinians under his jurisdiction.

IN 1947, several years prior to Abdullah’s killing, the newly-formed United Nations, rather than designate the entire land west of the Jordan River as the long-promised Jewish national homeland, enacted a second partition. Curiously, considering that this second fission again gave complete advantage to Arab interests, Jewish leaders accepted the painful judgment. The Arab states did not. On May 15, 1948, exactly 24 hours after the State of Israel came into existence, Azzam Pasha, Secretary General of the Arab League, declared to a tiny new country founded upon the ashes of the Holocaust: “This will be a war of extermination and a momentous massacre.”

This unambiguous declaration has been at the very heart of all subsequent Arab orientations toward Israel, including those of “moderate” Fatah. Even by the strict legal standards of the Convention on the Prevention and Punishment of the Crime of Genocide, Arab actions and attitudes toward the microscopic Jewish state in their midst has remained patently genocidal. For some reason, this persistence has repeatedly been made to appear benign.

IN 1967, almost 20 years after Israel’s entry into the community of nations, the Jewish state, as a result of its unexpected military victory over Arab aggressor states, gained unintended control over the West Bank and Gaza. Although the inadmissibility of the acquisition of territory by war is codified in the UN Charter, there existed no authoritative sovereign to whom the Territories could be “returned.” Israel could hardly have been expected to transfer them back to Jordan and Egypt, which had exercised unauthorized and terribly cruel control since the Arab-initiated war of “extermination” in 1948-49. Moreover, the idea of Palestinian “self-determination” had only just begun to emerge after the Six Day War, and – significantly – had not even been included in UN Security Council Resolution 242, which was adopted on November 22, 1967.

For their part, the Arab states convened a summit in Khartoum in August 1967, concluding:

“No peace with Israel, no recognition of Israel, no negotiations with it….”

The Palestine Liberation Organization (PLO) was formed three years earlier, in 1964, before there were any “Israeli Occupied Territories.” Exactly what was it, therefore, that the PLO sought to “liberate” between 1964 and 1967?

This question should now be raised in connection with the US-sponsored “Road Map To Peace in the Middle East,” a twisted cartography leading to “Palestine.”

THIS HAS been a very brief account of essential historic reasons why the so-called “Palestinian Territories” are not occupied by Israel. Several other equally valid reasons stem from Israel’s inherent legal right to security and self-defense. International law is not a suicide pact. Because a Palestinian state would severely threaten the very existence of Israel – a fact that remains altogether unhidden in Arab media and governments – the Jewish State is under no binding obligation to end a falsely alleged “Occupation.” No state can ever be required to accept complicity in its own dismemberment and annihilation.

Both Israel and the United States will soon have new leadership. Neither Jerusalem nor Washington should be deceived by the so-called “Road Map To Peace in the Middle East,” a twisted bit of highway that makes entirely inaccurate claims about “Palestinian Territories” and “Israeli Occupation.” For substantially documented reasons of history and national security, it is imperative that a twenty-third Arab state never be carved out of the still-living body of Israel.

If anyone should still have doubts about Palestinian intentions, they need look only to former Prime Minister Sharon’s “disengagement” from Gaza, an area that is now used by Hamas to stage rocket attacks upon Israeli noncombatants, and by al-Qaeda to mount future terrorist operations against American cities.

The writer, a professor of International Law at Purdue University, is the author of many books and articles dealing with military affairs and international law.