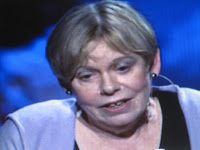 I just got done watching the entire mind numbing speech on ‘religious harmony’, by pseudo scholar, Karen Armstrong, which was filled with nothing but platitudes, parables and propaganda, and very, very low on substance and intellectual honesty. I take that back, there was absolutely nothing of value in the speech itself, but only if one uses it as a teaching aid to highlight academic buffoonery on a grandiose scale.
But hey, how could it have been any other way? Remember folks, this is a woman well known for turning the other cheek where the real facts about Islam is concerned. When pseudo scholar Karen Armstrong runs up against concrete fact, she simply looks the other way and turns up the volume,
Such it is with pseudo academics who have believe that, time invested in a particular line of thinking negates flirtation with contrasting views, no matter how correct. For a stark example, Karen Armstrong, talking about Islam in her book, “A review of Mohamed: a prophet of our time”, states the following zinger: “They had no designs on Europe”.
Nothing more needs to be said about that one liner, it speaks for itself.
What is also most interesting as it’s telling, is Armstong’s cribbing Bill Warner’s ‘Golden Rule’ concept. Armstrong tries to impress upon the audience that no one religion currently applies the Golden Rule concept of “Treat others as you want to be treated” in any meaningful way, though it transcends all religions, even (falsely) Islam as well.
Bill Warner has been talking about the “Golden Rule” rule for a long time, and how it’s a standard by which Islam should to be judged. Because to adhere to the Golden Rule, is to accept the precept and concept that all are equal, not only within one’s own group, but also with others outside that group as well. Such a high minded rule runs ‘smack dab’ into the caveman mentality that exists in the Islamic concept of the “Kafir” and “dhimmitude”.
Karen Armstrong’s Islamic scholarship is as disingenuous as its is fundamentally flawed, pinning her hopes on the world’s religions finally achieving a symbiotic state of peace between themselves, on the false premise that Islam is actually a member of the Golden Rule club. Sadly, and to the detriment of the world’s kafirs, Islam is a political, legal, militarial, religious and economical system that is very far removed from the concept of the Golden Rule, no matter how much Karen Armstrong closes her eyes and clicks her heels. KGS
NOTE: Here is more on the “We are the world, come beat us over the head with a big thick stick” mentality.