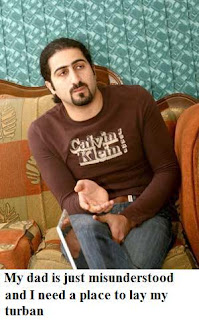 Question, why should the West lift a finger to help the son of the world’s most well known jihadi terrorist, who insists that his father Osama, is just “trying to defend the Islamic world”?
If Omar Bin Laden feels threatened, why not check out Syria or Tehran first? I’m sure that while their totalitarian security systems have some gaping holes, it would afford them better protection than here in the decadent West. KGS
Madrid, 5 Nov. (AKI) – An asylum claim by the son of Al-Qaeda leader Osama Bin Laden, Omar Bin Laden, is expected to be rejected by the Spanish government, according to one of the country’s major newspapers. El Pais, a national daily based in Madrid, quoted well-informed sources on Wednesday who said asylum was unlikely to be approved. Omar asked Spain for asylum after he arrived in Madrid on a flight from Cairo on Monday.

He was expected to be interviewed at length by government officials on Wednesday, said El Pais. The Ministry of the Interior will then notify Omar of its decision within 72 hours. If his claim is rejected, Omar will have 24 hours to appeal the decision, and the ministry a further 48 hours to review it. Seven months ago, Omar was refused entry to live in the United Kingdom with his British wife, Zaina al-Sabah. Omar said he no longer feels safe in the Egyptian capital, Cairo, where he lives, nor in Saudi Arabia, his country of birth, reported Spanish daily El Pais. He is reportedly being held at Madrid’s Barajas Airport where he has remained since his arrival.

If his claim is rejected, Omar could appeal to a Spanish court. He also has to prove that his life and physical integrity would suffer if he goes back to Saudi Arabia, his country of origin.El Pais said in the past five years there has been no precedent of Saudi citizens asking or having been granted asylum in Spain, and granting it to Omar would imply that members of the Bin Laden family suffer persecution in Saudi Arabia.

GOODBYE Omar, don’t let the tent flap hit ya, where the good lord split ya