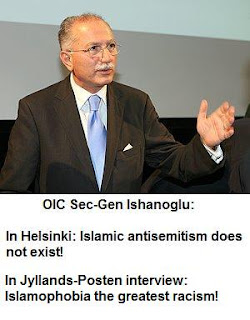 The Secretary General of the Organization of the Islamic Conference, Ekmeleddin Ihsanoglu is a familiar character here at the Tundra Tabloids, who managed to piss off the OIC’s official propagandist during his time in Helsinki.

The Tundra Tabloids was more than happy to oblige, because every time this imbecile opens his mouth, he reveals the true face of Islam. He is the Counter-Jihad’s ‘poster boy’, so to speak, whose speeches and interviews only serves to help our cause.

The more Ekmeleddin Ihsanoglu speaks, the more he shocks, disgusts, and gets people to roll in the aisles and laugh till their sides ache. So the next time the Counter-Jihad’s own poster boy, Ekmeleddin Ihsanoglu comes to town, invite him in for a talk, make sure the video is rolling and the sound is catching every word!

Now, straight from the “you just have to read or hear to believe it” file, is the OIC’s Secretary General, Ekmeleddin Ihsanoglu, in his own words in an interview conducted by the Jyllands-Posten, the paper that published the dreaded pictures of Mo. Crack open a bottle of the best brew or uncork a good vintage of wine, and kick back and read his best lines, they really are a treat! They’ll have you rolling in the aisle!

The man is lying through his teeth, he “careth littleth for the trutheth” for in order for him to really care, it would mean that he would have to conceed the point, that Islam is an ideology that need harsh critique in order for it to ever change into a more docile form. The fact the Ishanoglu is biting, kicking and screaming against any form of criticism, is proof enough that his is not sincere….and so, the Counter-Jihad’s ‘poster boy’, is the best mouthpiece we could ever hope to have! 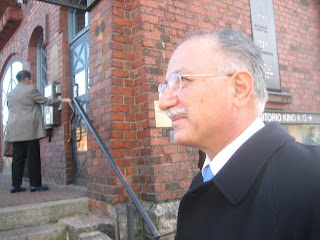 Thanks Ishanoglu, if you remember, the Tundra Tabloids shook your hand as you arrived to the building in Helsinki from you limo, I was the guy who said, “this will be a very interesting evening”.

I was also the guy shaking your hand to welcome you to the COUNTER-JIHAD, because you are our best mouthpiece our movement ever had, baby you’re the best! KGS