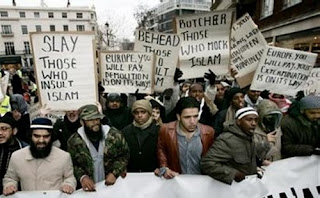 You just can’t make this stuff up, no matter how hard you try. The Guardian is a classic example of political correctness gone awry. Here is a story in which everyone and their brother knows that the Guardian is talking about Islam, but fails to mention it once.

The new measures being put into place regarding “preachers of hate”, is due solely to Muslim fanatic Imams and teachers, that up until now, have been able to make their way into Britain without much problem.

What other preachers of hate could they be talking about if not Islam,… Christian Baptists, Mennonites, Lutherans, Catholics or what? Political correctness mumbo jumbo on display in the British Leftist rag, The Guardian:

Foreign-born “preachers of hate” and other violent extremists will have to prove they have publicly renounced their views or be refused entry to Britain under tough new rules unveiled today. The measures, set out in a written ministerial statement by Jacqui Smith, the home secretary, will make it easier to exclude those who want to come to the UK to stir up religious or racial hatred.

Such preachers will be named and shamed, and the exclusion list will be shared with other countries to help them, the Home Office said. Smith said: “Through these tough new measures I will stop those who want to spread extremism, hatred and violent messages in our communities from coming to our country.

“Coming to the UK is a privilege and I refuse to extend that privilege to individuals who abuse our standards and values to undermine our way of life.”The new rules will:

• create a presumption in favour of exclusion in respect of all those who have engaged in fostering, encouraging or spreading extremism and hatred,

• provide that where an individual claims to have renounced their previous extremist views or actions the burden of proof is on them to demonstrate that this is so and that this has been publicly communicated,

• introduce changes that will allow the government to exclude nationals of the European Economic Area, and their families, from the UK, before they travel to this country, if they constitute a threat to public security or policy

• work with other agencies and community groups to improve the evidence base underpinning our exclusion decisions to ensure that we identify those who pose the greatest threat to our society,

• consider in all future cases whether it would be in the public interest to disclose that an individual has been excluded with a presumption to inform the public, and

• make greater use of UK watch lists to ensure that individuals who might fail to be excluded, should they seek to come to the UK, are identified, and any future visa application is considered with full regard to previous extremist activities. The move will cover anti-abortionists, animal rights extremists and neo-Nazis as well as extremist clerics.

Since 2005, 230 people have been banned on grounds of national security and for “unacceptable types of behaviour”, which include fomenting or glorifying terrorism and inciting hatred. Of those, 79 were excluded for unacceptable behaviour.

The most high-profile individuals to face exclusion orders include Omar Bakri Mohammed, who was banned in the wake of the July 7 terrorist attacks in the London transport system, and the Egypt-born cleric Yusuf al-Qaradawi, banned by the Home Office this year after being described as “dangerous and divisive” by David Cameron, the Tory leader. The Home Office anticipates that the new rules will see a larger number of people barred from Britain.

The ban rests on the government’s legal powers to tackle violent extremism and incitement to religious and racial hatred. It does not permit somebody to be banned for simply holding disagreeable political views but will apply to those who advocate illegal means to further them.
An MI5 report leaked to the Guardian this year on the current state of radicalisation and violent extremism in Britain noted that the influence of extremist clerics had “moved into the background” in recent years.