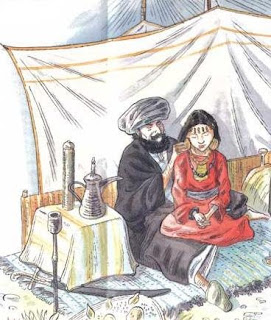 Yes we know, clerics with in the Catholic church have been involved in child abuse, but as of yet, most of the world remains ignorant to the fact that in some parts of Islam, Muslims are very much involved with it as well.
As readers of the Tundra Tabloids have come to know, Mohamed, the founder of Islam sanctioned the deflowering of a nine year old girl, and his example is followed even today. KGS
Times Online: A link between terrorism plots and hardcore child pornography is becoming clear after a string of police raids in Britain and across the Continent, an investigation by The Times has discovered.
Images of child abuse have been found during Scotland Yard antiterrorism swoops and in big inquiries in Italy and Spain. Secret coded messages are being embedded into child pornographic images, and paedophile websites are being exploited as a secure way of passing information between terrorists.
British security services are also aware of the trend and believe that it requires further investigation to improve understanding of terrorists’ methods and mindsets. Concerns within the Metropolitan Police led to a plan to run a pilot research project exploring the nature of the link.
One source familiar with the proposal said that this could eventually lead to the training of child welfare experts to identify signs of terrorist involvement as they monitor pornographic sites. Concerns have already been expressed at Cabinet minister level about the risk of vulnerable Muslim youths being exploited by older men.
Officers have noted that child sex abuse images have been found during investigations into some of the most advanced suspected plots. However, it is understood that the proposed research project was never implemented because the AntiTerrorism Branch was overwhelmed by the sheer number of cases it was having to deal with.
It is not clear whether the terrorists were more interested in the material for personal gratification or were drawn to child porn networks as a secure means of sending messages. In one case fewer than a dozen images were found; in another, 40,000.
British security sources confirmed that such a link had been discovered in several cases. They noted the contradiction between people supposedly devoted to theocracy and Islamic fundamentalism and their use of child pornography. “It shows that these people are very confused,” a source said. “Here they are hating Western decadence but actually making use of it and finding that they enjoy this stuff.”