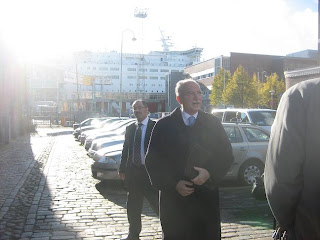 I have just came back from Helsinki, where I sat in a seminar sponsored by Finnish Institute of Foreign Affairs, to listen to OIC Sec-Gen Ekmeleddin Ihsanoglu deliver a speech about… Islam in Europe.

Here is the video of the Ihsanoglu’s response to the Tundra Tabloids’ comments and question during the Q&A period. The video is only of the OIC Sec-Gen Ihsanoglu responding to my statement and question. 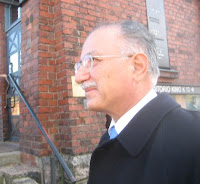 I transcribed the full speech given by Ekmeleddin Ihsanoglu, Secretary General of the Organization of the Islamic Conference, who by the way, gave one of the most disingenuous speeches I have heard in a very long time.

UPDATE: The BAron sends his complete list of URL links to previous posts of his on the OIC.

The Tundra Tabloids: Well first of all, I must take exception to the remarks by OIC Sec-Gen Ihsanoglu, that “there is no such thing as the right to insult.” Contrary to what the Secretary-General says, Freedom of speech does in fact mean the right to insult. Regardless of how tasteless it may be, it is a crucial, integral part of freedom of speech, one simply can’t survive without the other.

Also, while it’s understandable that professor Ihsanoglu presents the Organization of the Islamic Council in the best light possible, I find it necessary however, to bring to light some of the troublesome aspects of the OIC itself and its agenda, that Sec-Gen Ihsanoglu is unwilling to touch.

While the OIC is presents itself as being concerned with human rights as well as being a bridge for peace and understanding to the non-Muslim world, many of its own member states are the chief violators of human rights and promoters of the vilest forms of anti-Semitism seen since the rise and fall of National Socialism in Germany, during the 30’s and the 40’s. The evidence is undeniable, it’s a fact which has led the US House of Representatives to approve Resolution 1361 adopted on Sept. 23 of this year, with the expressed aim, and I quote:

So my question to professor Ihsanoglu is: In light of the US Congress resolution, Can OIC sec-Gen offer his own personal assurances that the O I C is not going to use the conference, to attack Israel, as well as focusing on global blasphemy, which “would legitimize arbitrary restrictions of freedom of thought, conscience and religion, and the freedoms of expression and opinion, all in the name of protecting religions from ‘defamation’ and ‘blasphemy.?

[Note: The OIC Sec-Gen first responds to the previous question about their approach to Democracy, what is the alternative to Islamism and what is the contribution of the OIC to solving conflicts whitin the OIC member states.]

OIC Sec-Gen Professor Ekmeleddin Ihsanoglu: “Well there are many other things to speak of..I don’t know what you mean by eh…this person asked me, “What is the alternative to Islamism?” I don’t know anything called Islamism, I know Islam, in fact I don’t know what Islamism is. Now, coming to the very important question, addressed by the last person, sir you are under the wrong impression.

Tundra Tabloids: How so?

Ekmeleddin Ihsanoglu: We are not anti-Semitic, (unclear) believing in moderacy and decency as part of my belief, my doctrine, I am a Muslim, and when I pray, I pray for all prophets including Moses, Jesus and Mohamed. So you cannot speak about any Muslim, good or bad, as anti-Semitic, this is a theory, this is not the case.

When it comes to OIC’s position, I have to tell you our group there is very active, and we’re proud of it. But we being active there, we say, to European countries who are members of this, eh, and other Western countries of this commission, the Council, the Human Rights Council, “Please, lets work together…please lets work together”.

Tundra Tabloids: Yes it is.

Ekmeleddin Ihsanoglu: I must then as you one question, why did the same newspaper refuse, the same editor who allwed these uncivilized cartoons, “on my prophet”, why he did not allow publishing a similar cartoon on Jesus Christ? The same newspaper?

I’m against any cartoon, impolite, against any prophet, against any revered symbol of any religion. I have to repsect that this is part of my doctrine. But I’m asking a question, when he refuses one on Jesus and accept, and even solicit and provoke and make a competition and then publish them. Why?

Here I think we have a little problem, not freedom, but a problem, it’s not a problem it’s a matter of morality which is (unclear) it’s public morality.