Skip to content
Home
/
2008
/
October
/
3
/
Uncategorized
/
South Africa Axes Achmed The Terrorist Puppet…….
Facebook
Twitter
Google+
LinkedIn
Pinterest
For the high crime of offending Islam and a billion or so Muslims, comedian Jeff Dunham, creator of the Achmed the terrorist puppet is being censored by the government of South Africa. Thanks to the Sheik:

Last month it was Mickey Mouse who got a fartwa from the religious nutters who occupy the worlds largest lunatic asylum, Saudi Arabia. Now “Achmed the dead terrorist” joins the list of endangered species: 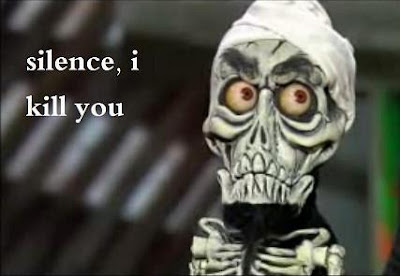 Wait a minute. Aren’t we supposed to believe that Muslims condemn and abhor
terrorism? At least until someone mocks an Islamic terrorist. Then suddenly one
has offended all Muslims. But if they really condemn terrorism, wouldn’t they find Achmed the Dead Terrorist inoffensive and maybe even helpful?

It’s no laughing matter. Funnyman ventriloquist Jeff Dunham is fuming after a ringtone advertisement based on his popular comedy skit, “Achmed the Dead Terrorist,” was scrubbed from South African TV because it mocks Islam.

The ringtone was taken from a puppet routine performed by Dunham, a native Texan, in a TV special on Comedy Central. A 10-minute clip of the comedian’s routine that was posted on YouTube has been viewed more than 66 million times since April.

But the government of South Africa doesn’t think it’s funny. According to iafrica.com, South Africa’s Advertising Standards Authority (ASA) ruled that a GloMobile ringtone commercial featuring Dunham and his puppet was offensive to Muslims.

The commercial depicts Dunham holding his skeletal puppet, Achmed, dressed with a white cloth around his head and demanding that the audience keep quiet, uttering, “Silence! I will kill you!” ASA officials said a South African man, Moegamat Khan, had filed a complaint that the commercial was offensive to the Islamic religion and created an impression that all Muslims were terrorists.

Even the comedian himself, Jeff Dunham, shows the lengths he’ll go to prove how politically correct he is, by jumping head first through this very enormous hoop straight into a steaming pile: “Achmed makes it clear in my act that he is not Muslim, so I’m sorry the gentleman Khan didn’t see my entire show.”No amount of appeasing and self flagellation will ever be enough for the “true followers” of the Arabian madman. As the Sheik aptly puts it: “Achmed is not Muslim? How insanely PC.”The ventriloquist further goes on to state that he has skewered “whites, blacks, Hispanics, Christians, Jews, Muslims, gays, straights, rednecks, addicts, the elderly, and my wife. As a standup comic, it is my job to make the majority of people laugh, and I believe that comedy is the last true form of free speech.”…If the Western spine continues to slacken in the face of intolerant Muslims, then the “last true form of free speech” will be finally laid to rest in museums and viewable only through thick sheets of glass minus the audio. KGS