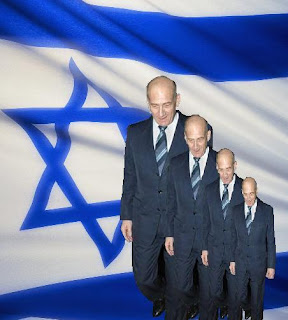 Even in the last minutes of his time in office, Ehud Olmert is determined to prove to the Israeli public, that he is actually just a shell of the man that he pretended to be.
J’lem Post: “Israel will have to give up virtually all of the West Bank and east Jerusalem if it wants peace with the Palestinians, Prime Minister Ehud Olmert said in a farewell interview published Monday, saying Israel faced a stark choice and needed to make a decision soon.”
The man is as delusional as the Left, who are right now applauding his words (conversion) while condeming his “taking so long to mouth them”.
It’s politicians like Ehud Olmert and Tzipi Livni that breath hope into the corpse of Palestinian nationhood from the sea to the Jordan River, all they need to do is to wear the Israelis down, and they will eventually cave in to all of their demands. What I mean to say is, that the Palestinians have not given up on “GREATER PALESTINE” which means the destruction of the state of Israeli.
If one were to ask from the average Arab living in the WB or in Gaza, whether or not they would support Israel’s destruction if the opportunity presented itself, the results would be a resounding, overwhelming majority. There is no interest in building a proper foundation for any eventual peace and co-existence with Israel, inside the Palestinian camp, either in the WB or in Gaza. That’s the truth,, no matter how unconvenient it may be.
Srdja Trifkovic has his own insights in an article on Olmert’s recent admissions, and it’s worth the read.
ST: “Among reasonable people of good will on both sides of the divide in the Holy Land – and let us give Ehud Olmert the benefit of the doubt here – the concept of land for peace is still fundamentally valid. It needs to be re-thought more realistically than ever before, however: what land(s) exactly, for what kind of peace? Signed and sealed by whom, on what surety, and with what external guarantees?”
Exactly Srdja, what external gauarantees?
The truth is, that there are NONE, NADA, ZIPPO and like during the Oslo years –in which Israel’s leaders were witness to the greatest display of Palestinian intransigence ever seen in an international “THREE RING CIRCUS” called the Oslo Peace Process– Israel will be expected to deliver up more for less, and restrain itself, while the Palestinians play their favorite game of “murder the Jew” and hide behind the skirts of it’s bitch called Europe. If you disagree with the Tundra Tabloids’ POV, then present your case, I’m sure everyone would like to see just why you would be so full of hope. KGS