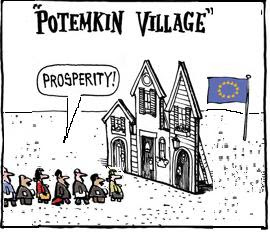 The state “in waiting” that should never have been allowed to be “in waiting” in the first place, has now sent its “shadow ambassador” to Brussels to lobby on behalf of the Albanian state No.2. Common sense demands that Kosovo be returned to Serbia, with some mutual agreement of a wider form of an autonomy being crafted.

EUOBSERVER / BRUSSELS – The main tasks of Kosovo’s new embassy in Brussels will be to lobby the EU for wider recognition of the country’s independence and to raise awareness of Serbia’s attempts to sabotage the young state, Kosovo envoy Ilir Dugolli told EUobserver.

“Negotiating the question for more recognition of Kosovo is the absolute priority.

In the case of the EU, all the other steps go through this step. You cannot really make much progress in negotiating with the EU unless this hurdle is overcome,” Mr Dugolli said. “That for some time will continue to exhaust a considerable part of our energies.”

The Balkan country proclaimed independence from Serbia in February and has been recognised by 21 out of 27 EU members, with Cyprus, Greece, Romania, Portugal, Spain and Slovakia holding out for now. The partial recognition means that Kosovo cannot establish formal legal relations with the EU or launch a feasibility study for a future Stabilisation and Association Agreement.

When Mr Dugolli arrives in Brussels in mid-October, his official title will be charge d’affaires to the Kingdom of Belgium, as Kosovo cannot formally open a mission to the EU. The basis of his work with the EU institutions is still under negotiation, with meetings to take place initially on a goodwill, ad hoc basis.

“I’m hopeful the commitment the EU has expressed many times about the Balkans including Kosovo will be the guiding principle, so that representatives of Kosovo are provided access and given an opportunity to hear views from the EU and present the views of Kosovo institutions to the EU,” Mr Dugolli explained.”

The EU’s insistence on ripping Kosovo from Serbia, a sovereign state, proves once and for all that the premise behind the EU’s own multicultural policies is nothing more than a Potemkin Village. The EU’s own leaders are insisting that people inhabiting the same region, are unable to live together, they must have a state of their own. Such thinking thereby removes the rug out from underneath the very feet of the multiculturalists themselves.

I advise anyone who has not read Iivi Anna Masso’s article about the dilemma created by Europe’s recognition of Kosovo, to do so now. KGS