I would have never believed if I had not seen it with my own eyes. Here is the headline to a al-AFP report published at the Finnish YLE online website, that actually depicts the attack on Israeli soldiers in Jerusalem last night as an act of terrorism, though the headline fails to mention it was a”Palestinian”:

A dozen Israeli soldiers wounded in the Jerusalem attack. A Palestinian Man steered the car into the soldiers. According to Israeli authorities, the attack occurred in the border region, which is divided into Jewish and Arab areas of Jerusalem. Israeli security forces shot the Palestinian man in this car. AFP

The Helsingin Sanomat however, reports it in a more ambigous way, with the headline failing to mention both Palestinian and terrorism: Auto ajoi ihmisjoukkoon Jerusalemissa
Julkaistu: 0:17

A car drove into a crowd in Jerusalem.
Published: 0:17

Several Israelis were injured Monday evening in Jerusalem after the Arab man drove a car to them. According to police, this was a terrorist attack. Authorities reported that the car’s driver was shot to death. There has been a dozen injured, of which two injuries are serious. Israeli radio that all the injured were soldiers.

The J’lem Post report, correctly labels the man as a terrorist in the headline, but fails to mention that he was a Palestinian as well. But the report was the best out of all three by far: 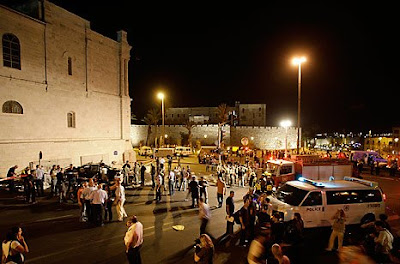 JP: Kikar Tzahal terrorist identified as 19-yr-old from e. J’lemThe terrorist who rammed his vehicle into a group of soldiers at a central Jerusalem thoroughfare late Monday night has been identified as Kasem Mugrabi, 19, from Jabel Mukaber in east Jerusalem.[…]The attack took place at the city’s Kikar Tzahal near Jaffa Gate. The assailant, who was driving a BMW, crashed into a group of off-duty soldiers on the sidewalk, where his car came to a grinding halt. Jerusalem police chief Aharon Franco said that the attacker was shot dead “within seconds” by an off-duty IDF officer who was touring the city with his unit. He added that there was no intelligence information ahead of the attack, but noted that Jerusalem was under heavy security alert due to Ramadan. The city’s police chief said that the lone attacker was an Arab resident of east Jerusalem. The pedestrians wounded in the attack were rushed to Jerusalem’s Hadassah-University Hospital at Ein Kerem, Hadassah-University Hospital on Mount Scopus and the city’s Sha’are Tzedek Hospital. Finnish state TV News YLE deserves a clap of the hands and a well done for reporting the attack as an act of terrorism. The Helsingin Sanomat stayed true to form in its substandard policy of not accurately reporting on Palestinian acts of violence. There have been brief moments of accuracy at the HS, but it’s a result of mere happen chance, not from company policy. Kudos to YLE. Hopefully it marks the beginning of a shift in company policy. KGS