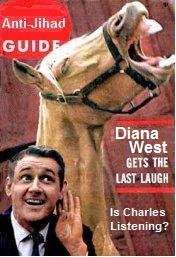 When the Tundra Tabloids first got wind of the upcoming meeting set to take place in Cologne Germany on the 20th, I knew what the LGF response would be. Fascism, racists and scum oh my!

Vasarahammer was kind enough to give the TT the heads up about the recent flare up, but the TT was already on top of things, already formulating a response to the LGF ankle biters who refuse to stop kicking their favorite dead horse. (No offense to Mr.Ed)

Never mind the fact that, Filip Dewinter (Vlaams Belang), represents a Flemish separatist party in Belgium that is one of the most pro-Israel and openly Judeophile political groups in all of Europe. It’s also a party that favors, capitalism, small government which means scaling back big government programs, favoring a return to the least amount of intrusion by the politicians in Brussels, in the private affairs of its citizens.

The Vlaams Belang’s party platform is against everything the LGF crowd are claiming the VB stands for, so therefore, its not the VB that should be under scrutiny, but those who are making the baseless charges against them. It’s that simple. Enter Diana West, who had just completed a tour of Western Europe this summer, talking with all the principle people involved in the Counterjihad movement. Here is what West has to say about the latest “drive-by blogging” by Charles Johnson, editor of the Little Green Football blog. Go get em Diana! KGS Diana West: On September 20, a European group called Cities Against Islamisation is sponsoring a demonstration called “No to Islamisation” in Cologne/Koln, Germany. Although the demonstration has been planned for some time, just last month the city council there approved controversial plans to construct a mega-mosque and surrounding Islamic complex in this ancient city famed for its skyline dominated for centuries by the largest Gothic cathedral in northern Europe. The speakers at next Saturday’s demonstration, according to the Cities Against Islamisation website, will be:

According to a headline posted on the website Little Green Footballs (LGF), this means: “Fascists Hijacking Anti-Jihadism in Cologne.” It went on to say:

That list contains virtually every racist, fascist leader in Europe, and you can bet that the usual suspects will be defending it. The concept of fighting against the global jihad has lost much of its credibility, because some of the most visible spokespeople refuse to unequivocally renounce their associations with this crew of vile Neanderthals.

Every “racist, fascist leader” in Europe? How ridiculous, but how poisonous. The post concludes by calling these men “fascist bastards.” Such crude invective is far better suited for spray-painting on a wall than writing even in an Internet blog, but, of course, in an Internet blog it is far more damaging to political reputations and vital causes.

My question is, Why? Why this acid campaign to destroy with slanderous and empty buzzwords some of the only politicians in the world with the guts to stand up in the public square (literally, and, as only partly indicated in the picture above, at great physical risk) and try to turn back the Islamic colonization of Europe–a trend which, as Bernard Lewis has famously predicted, barring change, will likely be complete by the end of this century. I speak here specifically about Filip DeWinter, Mario Borghezio and Heinz-Christian Strache, each of whom I interviewed this past summer in Antwerp, Brussels and Vienna respectively. I am not familiar with the two Germans and I will address Le Pen below.

Dewinter, Borghezio and Strache are not “racist-fascist” leaders. They are, in their very different styles, leaders–very popular (but not in the press!) elected leaders–who are bravely combating the smugly dictatorial, entrenched, leftist establishments of Europe which, as Bat Ye’or has explained in Eurabia and elsewhere, have made common cause with the Islamic world, exchanging their Western heritage for power and oil. Dewinter, Borghezio and Strache are all Euro-skeptics, meaning they oppose the sovereignty-gobbling European Union. Dewinter and Borghezio are doubly revolutionary in that they also represent the secessionist movements of Flanders and Nothern Italy that want independence from Belgium and Italy respectively. (Here is an astute appraisal of Lega Nord, Vlaams Belang and the trend of “localism” in Europe by my good friend Paul Belien.) “Racist”? “Fascist”? Did I say the LGF post was ridiculous and poisonous? It’s equally absurd and outrageous.

I find a fascinating revelation contained within. LGF writes: “The concept of fighting against the global jihad has lost much of its credibility because some of the most visible spokespeople refuse to unequivocally renounce their associations with this crew….”

Question: How can “the very concept” of fighting jihad be tarnished by anything? That is, if the cause is just (and the threat is dire), nothing can take away from it–and certainly not the “associations” of some “spokespeople,” whatever that means. But I can just see LGF, circa 1942, dumping verbal sludge on FDR and Churchill for not “renouncing unequivocally” their associations–or, in this historical example, their alliance–with mass butcher Stalin. “The very concept of fighting Nazism has lost much of its credibility because some of its most visible spokespeople refuse to unequivocally renounce their alliance with this crew of Soviet murderers….”

That said, I don’t like Le Pen, who is also appearing at the September 20 event. I can’t even tell you what he stands for. (Last I heard, he was effectively pro-Islamization so long as Muslims speak French, so I can’t imagine what his contribution to an anti-Islamization rally might be.) Last summer in Brussels, I also interviewed Carl Lang, a member of European Parliament for Le Pen’s Front National, and concluded that this political party is in total disarray, and that the 80-year-old Le Pen himself will probably have to retire before any coherent anti-Islamization movement has a chance of evolving out of the political group Le Pen will eventually leave behind. (Coincidentally, Le Pen announced this week he will effectively retire in 2010.) Last summer, when I asked Filip Dewinter about the upcoming event in Cologne/Koln, Le Pen wasn’t even on the list of invitees. I don’t pretend to follow the internal machinations of the group Cities Against Islamisation, so I can’t explain how or why Le Pen came to be added to the list, but again, in the face of “racist-fascist” hysteria, I keep thinking of the analogy of FDR, Winnie and hideous “Uncle Joe.” Who’s on which side here?

Speaking of sides, I find it quite telling that in addition to the hysterical opposition of LGF, there are a couple of other groups also voicing opposition to the protest in Cologne/Koln–albeit in a more measured (!) tone. The Organization of the Islamic Conference (OIC) has come out against the protest, and Iran, an OIC member, has separately lodged some kind of official complaint with EU President Sarkozy actually asking him to prevent this free assembly of Europeans from taking place.

LGF, OIC and Iran vs. Filip Dewinter, Mario Borghezio, Heinz-Christian Strache (and I couldn’t care less about Le Pen who at least hasn’t murdered 20 million people a la Stalin). I know which side I’m on.

You are either with us, or against us. KGS