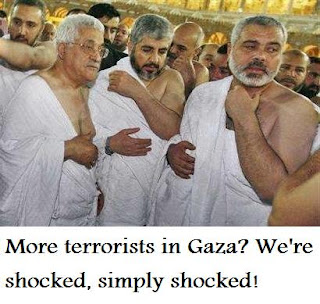 A new terrorist organization is sprouting up from within the Islamist terrorist paradise called Hamastan? The Tundra Tabloids truly wonders how that could that be? NOT.

Gaza City, 2 Sept. (AKI) – A new armed group linked to Al-Qaeda has been established in the Gaza Strip. Known as the Umma Army, it has been publicised in the Middle East media for the first time.

Several journalists reportedly attended a training session conducted by the militants on Monday in the area of Khan Yunes, in the south of the Gaza Strip.

According to the Arab daily, Al-Quds al-Arabi, Hamas leaders have given the Umma Army approval to conduct military training and operate freely providing it does not interfere in party affairs or Palestinian politics, or impose their ideology on the people of Gaza.”

Well well, the TT has reported for years on journalists having unhealthy relationships with the terrorists, so the news blurb that journalists are getting access to these new terrorists’ “inner circle”, doesn’t come as a surprise. So we can expect in the near future, stories, featuring “Umma Army” terrorists reciting one bogus claim against Israel after another. If things work out for the MSM, their spin doctors will be soon revamping the Hamas’ image of being the “more moderate and pragmatic” of the two. I can just see it happening.

Here is another reason (below) why we should view the followers of the Jihad ideology, as a loosely knit band of pirates rallying together under their jihadi “pirate” flag. The jihadis do not have to belong exclusively to Al-Qaida in order to carry out an identical, or very similar worded agenda. They all pretty much want the same things, perhaps in different orders, but the one thing that unites them more than anything else, is Islam, the Qur’an, and the words and deeds of their prophet Mohamed.

The armed group is led by a 35-year-old called Abu Hafs who has been arrested by Hamas police several times in the past. Around 25 men joined him for training on Monday with their faces covered because they did not want to reveal their identity and allegiance to his organisation in the Palestinian territories.”We are not a branch of Al-Qaeda and at the moment we do not have contact with them,” said Abu Hafs. “We are linked to the brothers of the Al-Qaeda organisation only from an ideological point of view.

“We believe in the establishment of the law of Allah and to change the democratic process undertaken by Palestinian society that is based on the secularism of the non-believers.”The group surfaced for the first time last January when Gaza had threatened to carry out attacks in Israel during the visit of American President George W. Bush. The group is financed by individuals from Gaza who want them to conduct attacks against Israel and support them even though they wear balaclavas inscribed with “gangs of death”.

That’s the nature of the enemy folks. Gangs of “juiced up” jihadis who care little for human life, whether they be Muslim or non-Muslim. That’s the mentality that is easily spread by simply reading and believing Muslim holy texts that portray Mohamed as the “supreme example” of human character.

That’s why we hear about (and have on record) Muslim males marrying pre-adolescent girls, multiple wives, the beating of those wives and rape of women because the prophet of Islam did so himself. And that’s just for starters. KGS.