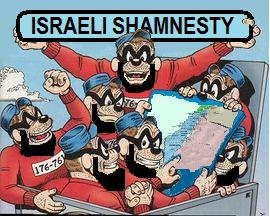 And the list goes on and on and…….
J’lem Post: “Included among the prisoners are two men who were serving life sentences for killing Israelis. Said al-Atba was convicted for his part in a 1977 explosion in Petah Tikva’s market that killed Russian immigrant Tzila Galili, 54, who had made aliya four years earlier.
The longest-held Palestinian prisoner, Atba had been convicted of bomb-making, planting explosives, illegal military training and membership in a illegal organization.
Muhammad Abu Ali had been jailed for life for the fatal shooting of 20-year-old yeshiva student Joshua Saloma, a newly arrived Danish immigrant, in Hebron in 1980. He was later convicted of killing a Palestinian in jail whom he had accused of collaborating with Israel.”
Releasing cold blooded murders from prison seems to be the present fad in Jerusalem, but what will Israel gain from it all is yet to be seen, at least the Israeli HCJ seems to be concerned about that one.
“On Sunday, the High Court of Justice rejected a petition by the Almagor terror victims organization against the release. But unlike with earlier petitions filed by the organization against prisoner releases, the court asked the state tough questions and demanded to know how Israel would benefit from the move.”
But then again, the HCJ did in fact reject the petition that sought to quash the release of the terrorist, so their judgement is just as faulty. The HCJ’s decision to reject the petition by the Almagor terror victims, is as confidence building as the promises made by the terrorists to refrain from future acts of terrorism.
“The prisoners boarded a bus after signing a commitment to abstain from terror activity.”
Yeah riiiight! KGS