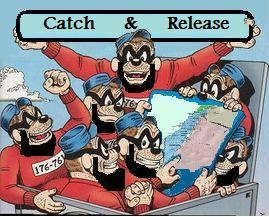 Shin Bet source: “They work day and night to capture and neutralize terrorists, and all of it is gone in an instant.”
That’s right folks, what’s the sense in catching wanted terrorists when they are let go by the politicians? I can’t see how letting violent, convicted criminals go free, will somehow translate into “warm and fuzzy feelings” towards the Israelis. No, if anything, it’ll mean to the Arabs: “once a sucker is always a sucker”, until more rational minds prevail in Jerusalem.
“The government’s decision to release some 200 security prisoners – mainly from Fatah and including two with “blood on their hands” – to help Palestinian Authority President Mahmoud Abbas is opposed by the Shin Bet (Israel Security Agency), a senior defense official told The Jerusalem Post on Sunday. News of the impending release was received negatively among Shin Bet handlers and agents, the source said.
[…]
About 40 percent of security prisoners are released before completing their sentences, the defense source said. “People in the Shin Bet end up asking, ‘Why do we capture these people? Where did all my work go? Where is the deterrence?'” He added that similar responses were heard in the corridors of judicial departments within the security forces. “A terrorist who plants an explosive device gets 10 years in prison but will end up being released after three or four years. This hurts the motivation in the Shin Bet,” he said.”
This will of course backfire, because, many of those set to be released will soon be back to plotting and scheming against the Jewish state. And there were many of us who criticized the Palestinians for their “revolving door policy” which meant letting terrorists free soon after their capture. Turns out that Israeli politicians are just as eager. More here. KGS