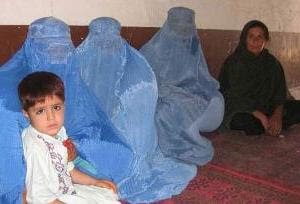 According to the apologists and other ignorant commentators, this is just another example of Muslims simply misunderstanding their own religion. Is that at all possible, or perhaps they know all to well what their religion demands?

The Independent: Sitting among the plastic flowers around his desk, where an optimistic United Nations scales of justice poster competed for space with images of Afghanistan’s President, Hamid Karzai, Colonel Ghulam Ali, a high-ranking regional security officer, explained sternly that he supported the authorities’ right to convict victims of rape.

In Afghanistan whether it is forced or not forced it is a crime because the Islamic rules say that it is,” he claimed. “I think it is good. There are many diseases that can be created in today’s world, such as HIV, through illegal sexual relations.”

Come on folks, lets get with it. The ROP contains hundreds of millions of people who think like Ali, it isn’t a fluke or an anomaly, but everyday fact of life, and women have to face it, deal with it and experience it every day of their lives, unless they manage to break free and immigrate to the West.

Then if they’re really lucky -after reaching the safe haven of the West- they won’t come face to face with the same predicament, because indeed, Western states are slowly coming under the influence of Islam. Many Muslims who fled to the West (these modernists are of course welcome) are finding the same phenomenon from which they fled.

Demonstratively foolish politicians/judiciary/media and activists are promoting a system that these Muslims neither want for themselves or for others. That is the state of things here in the West, the situation is comparable to Soviet dissidents having made it to the West, only to have found the same the political climate they escaped from. It’s that serious. KGS
H/T : Jussi